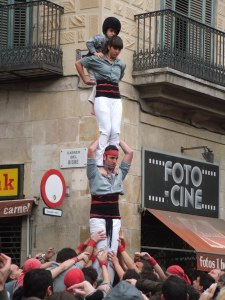 This is a castell, Catalan for castle. It is a typically Catalan tradition, dating back to the end of the 18th century. It is a very small castell, as they can have up to 10 levels, with up to 5 people per level.
The whole thing has even it’s own terminology. Here is what Wiki has to say about it.
The least one can say about it, is that the castellers need an uncommon strength and stamina to achieve such towers. Imagine the guys forming the base, with up to 50 people standing on their shoulders! Amazing! Amazing as well this little girl on the picture scrambling her way up by stepping on everybody else.
A last word about it for now: I read somewhere that they want that tradition to be recognized as a World Heritage. Good!

This entry was posted on September 22, 2009 by robthefrog. It was filed under Barri Gotic, castellers, old town, tradition .