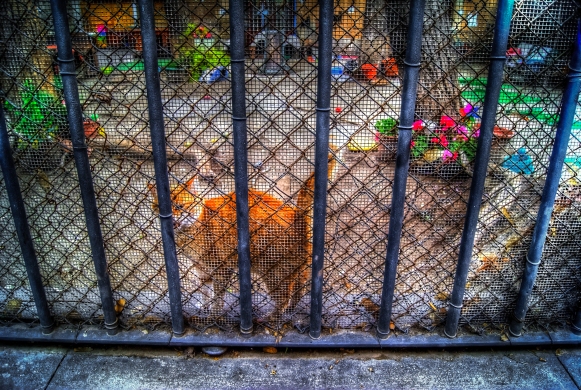 You’re in BCN? You need a furry friend! Best place to go, the cat garden!

I am the boss here!

He was guarding the shop… Who is the boss of you?

Fernando Botero’s Cat (gat, in catalan) was purchased by Barcelona City Council in 1987. From then until 2003 the cat wandered the city’s streets in search of a permanent site. His first stop-off point was the Parc de la Ciutadella, near his fellow animals at Barcelona Zoo. Then he was taken to a site by the Olympic Stadium, and a few years later he was put in a little square behind Barcelona’s medieval shipyards. Finally, in 2003, the decision was taken to move him to a permanent location at the end of the newly created Rambla del Raval. It is maybe because cats have nine lives, that he has made his presence so strongly felt. Everybody recognises the figure of the bronze cat, with his chubby, rounded form, childish features and long tail. The sculpture has become an integral part of one of Barcelona’s most widely redeveloped areas and is a favourite meeting place. Some brave souls even clamber onto the cat’s back to have their photos taken.

A stork brought me

It’s true, my mum told me! So please stop that silly nonsense about cabbages (WTF) or maternity wards!!!

At the Boqueria, Europe’s coolest market.

An evening at the Circ Raluy, an traditional circus, without animals being kept in tiny cages in the cold.

Friendly but shy moggie in the neighborhood.

Doggy in the lamplight!

How much for the doggy in the window?

Looks sometimes quite ‘hitchcocky’ in the Port Vell area… Be afraid, be very afraid of the white bombs!

Are you looking at me??? 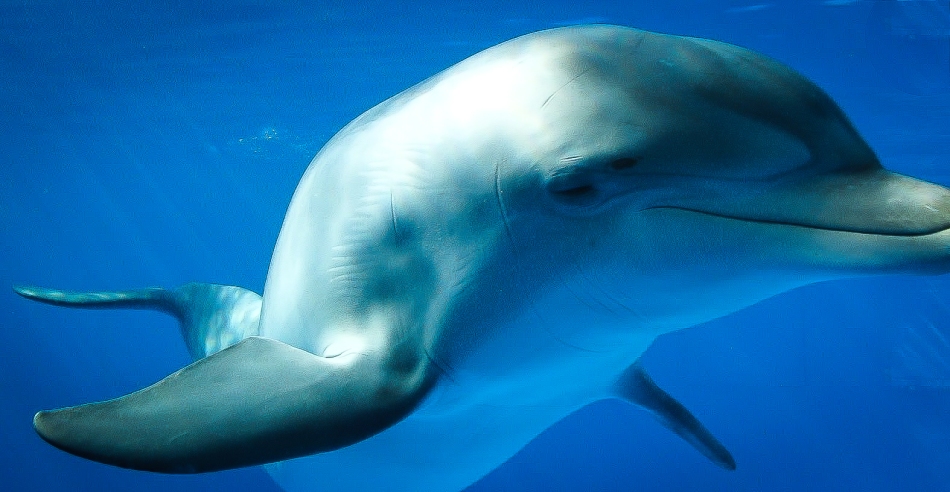 …or am I looking at you? Did you bring something to eat? Is it in your bag? Don’t you think it smells fishy here? I love the smell of fish in the morning! 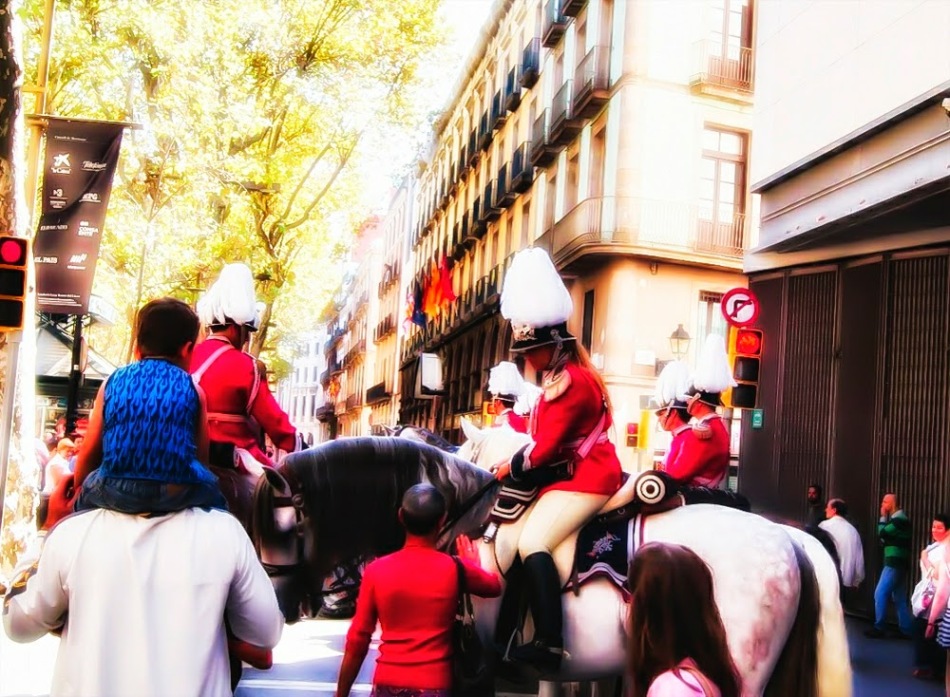 Can I touch the horsey? Yet another festivity on the Rambla. The Rambla (which has several names, depending on which section of it you are) is one of the 3 main thoroughfares through the old town, together with Paralel and Laietana. It is actually a dried riverbed, recovered along the centuries with dirt and other stuff. Now, it is the promenade, always full of tourist and photographers watching people go by. A narrow passage through the old town, it is as best a very slow going, driving down the mile or so of its length. And well, whenever there is a festivity, the city closes it. But when it’s open, almost every taxi driver in town chooses to pass this way, doesn’t matter where you are going. The perfect tourist trap: it’s nice, it’s slow, and the meter is turning and turning… Even at 4 in the morning, when you have an early plane to catch, just on time for the slow moving street cleaning machines…
But hey, it’s a photographer’s paradise!

Wake up, guys and gals, spring has arrived! 25 degrees today, that is mid to high seventies, or so they say! 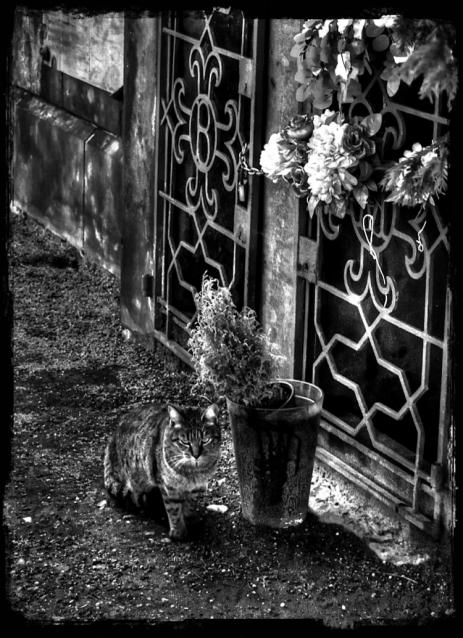 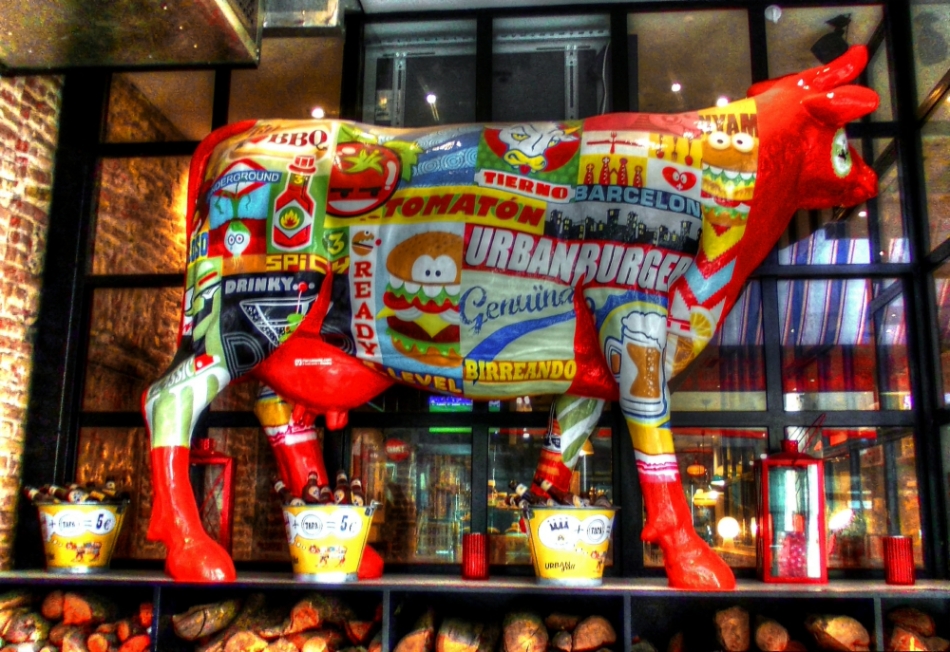 Even on this cow in a cafe window. Mandy discovered her.

Looking at me from inside the Jardinet dels Gats cat shelter, and wanting to be loved and adopted. 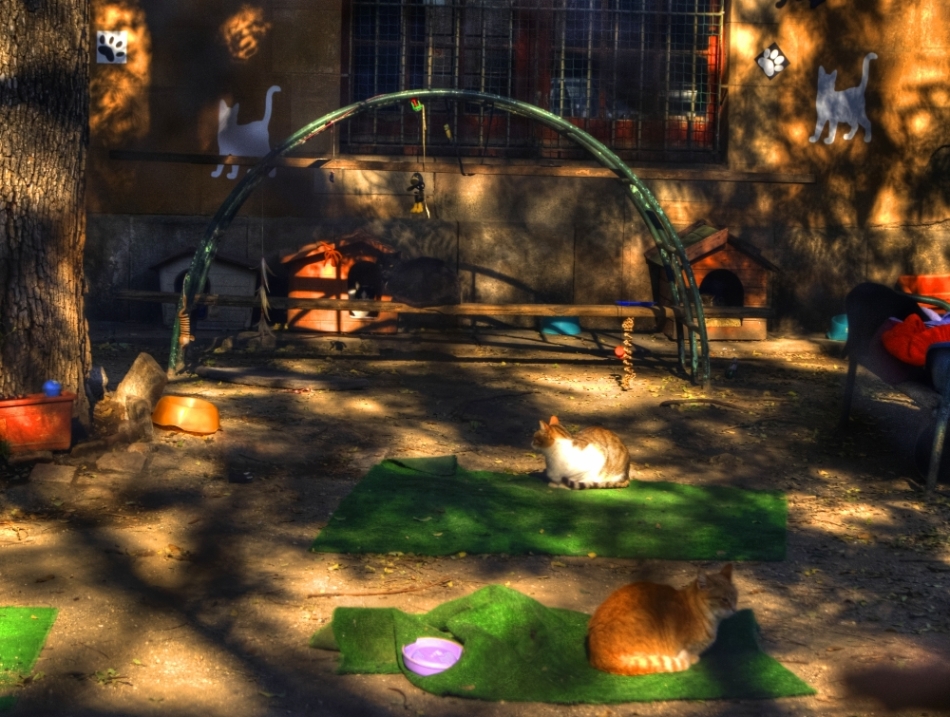 El jardinet dels gats, catalan for the cat garden, is an city center shelter for abandoned or homeless cats. Our very own tiger, Rio (you can visit his blog here), came from here.
If you’re in Barcelona, and if you need/want a cat, this is the place to go!

Birds of all feathers…

… will love this luxury bird penthouse!

I’d be very curious to know the name of this very shiny tree, if someone knows it! 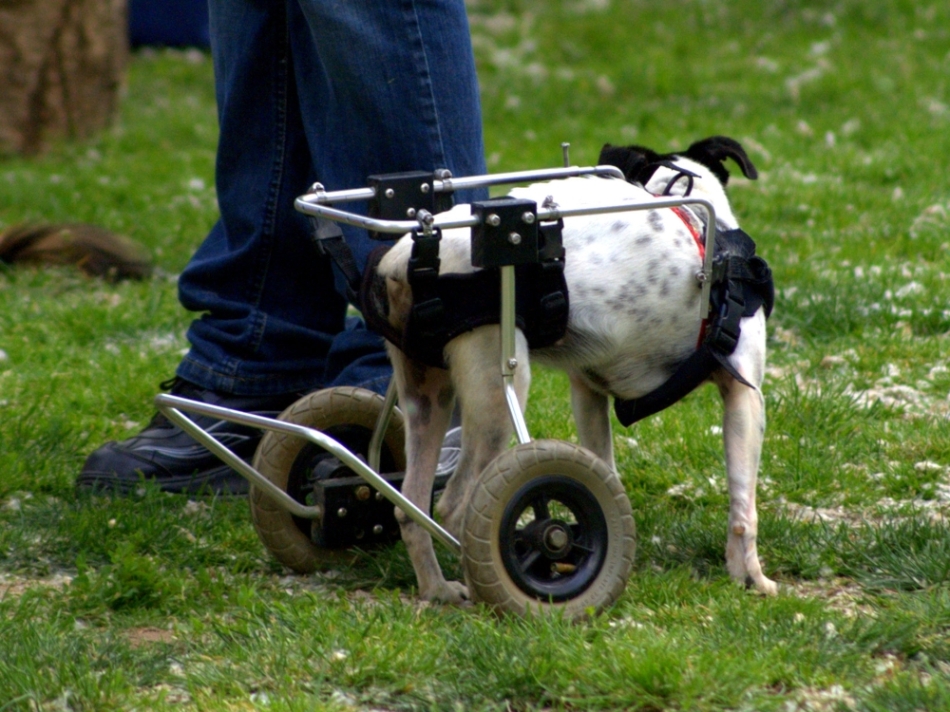 There is a charity here in Barcelona building these… new legs for disabled dogs. Good work, guys! 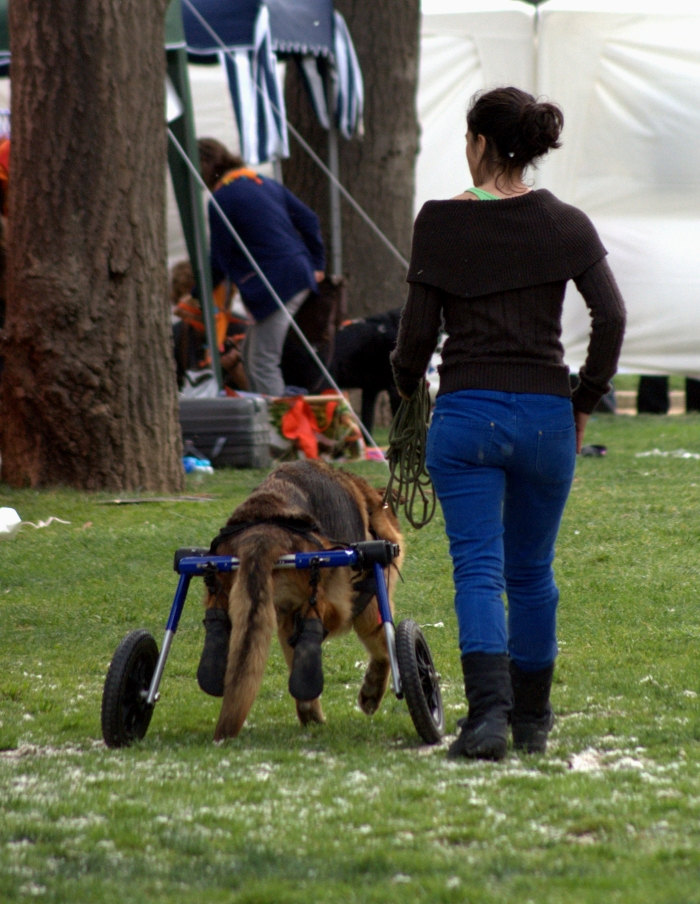 Barcelona has a very fine zoological garden, inside Ciutadella park. Many people specially come to see the dolphins dancing.

Someone told me that it is sometimes raining cats. Can’t smell them!!! 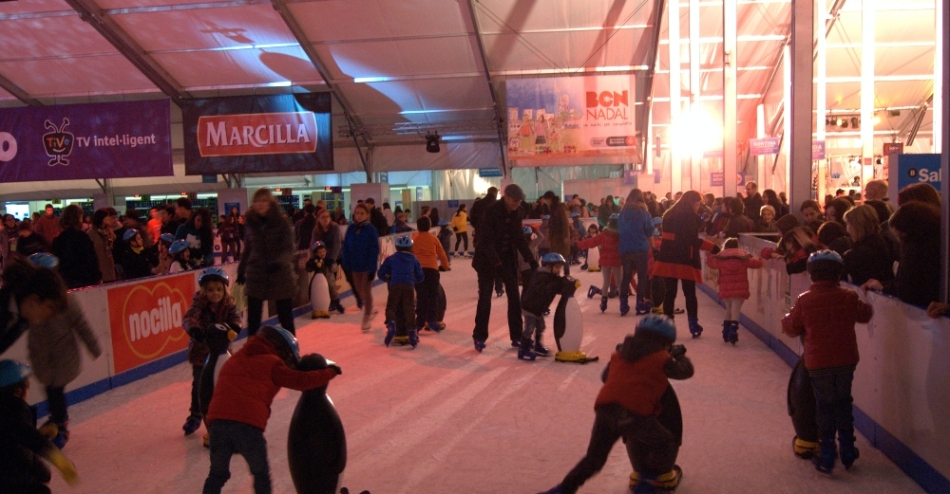 It is winter, but, with 18 degrees, it doesn’t feel wintery at all to us. So, there is always the possibility to feel the cold at the ice rink on Plaza de Catalunya. If you’re of the smaller persuasion, you can even skate with penguins!

Oh: do NOT feel obliged to buy the things they advertise…

From a bird’s view…