The old covered market in the Born, now a culture center, complete with 2000 years old roman street. A must see!

A few meters away from the Picasso Museum, there is this, the European Museum of Modern Art. Not been inside yet (well, we have about 99 or 100 museums in town, and this one is quite new…), but we will soon, as it specializes in modern figurative art (photography…). Here is the intriguing and inviting entrance.
Many museums in the same area, the mammoth museum, a motorbike museum, a museum of pre-colombian art, the museum of bizarre things…..

The Picasso Museum is celebrating it’s 50th anniversary, so we went there on Saturday. Photos forbidden, but… Here is one of the beautiful ceilings. And also one of the paintings.

A late night out, an enticing shop window…

Beach time is back!!!

Very soon, instead of looking for a sunny spot to have a coffee, we will be shifting to a cold drink and some shadow. 27 degrees this coming weekend, yeah!!! Beach time, folks!

This is what Wiki has to say:

Catalan (English pronunciation: /kætəˈlæn/, /ˈkætəlæn/, /ˈkætələn/; Catalan: català, IPA: [kətəˈɫa] or [kataˈla]) is a Romance language, the national and the only official language of Andorra, and a co-official language in the Spanish autonomous communities of Catalonia, the Balearic Islands and Valencian Community, where it is known as Valencian (valencià, IPA: [valensiˈa]), as well as in the city of Alghero on the Italian island of Sardinia. It is also spoken, with no official recognition, in the autonomous communities of Aragon (in La Franja) and Murcia (in Carche) in Spain, and in the historic Roussillon region of southern France, roughly equivalent to the current département of the Pyrénées-Orientales (Northern Catalonia).
Although recognized as a regional language of the department Pyrénées-Orientales since 2007, Catalan has no official recognition in France, as French is the only official language of that country, according to the French Constitution of 1958.

OK, thank you Wiki. Now… BIG trouble! Since 1982, teaching in catalan schools, kindergardens, universities, is in the Catalan language.
But since there are some Spanish people (…) living in Catalunya as well, some of them protested. They want their kids to be tought in Spanish, the language of Cervantes and Lorca.
So, what happened? This week,the highest tribunal in the country (meaning Catalunya, not the other one, not Spain) decided that, to respect a tiny minority’s wishes, teaching will from now on be done exclusively in Spanish, in schools, universities, kindergardens, etc.
The Catalan majority literally exploded, as you can imagine!

Meanwhile, in Barcelona… I took this photo in February, long before this story started. The owner of this shop, with an originally Spanish sign, tried to ‘ catalanise ‘ it, transforming escritorio into escriptori, papeleria into papereria. He might be a member of one of the few political parties here fighting for independance from Spain.

Many economists say that without Catalunya, Spain would long be bankrupt… As I said earlier, TBC. We’re living interesting times.

Summer in the Born

Summer. Although the temperatures plunged rather ‘dramatically’ (not my words) in the last 3-4 days, it is still very nice, 27-28 degrees. So, you just leave your windows wide open, letting a bit of cool breeze coming in. There is always the danger of a mosquito or 2 (and I hate the M word!), but there are enough more or less natural defenses around.
Right, I am on holidays this week, so I might actually find the time to browsing your blogs and put a few witty (hopefully) comments… Been extremely busy and tired lately.

I am a big fan of the very lovely balconies we have here in Barcelona! Here is one more, in the Born, near Santa Maria del Mar.

My World Tuesday. Check what my blogmates did, it’s worth the trip!

A novelty way for tourists to move around town, in herds. Would love to have one to go to work!

Watching… My, what big eye she has!

We’re in France for the weekend (again), but we’ve got someone to watch over this blog!

I’m from the bicycles (rental shop) on Plaza Picasso, 44. Here is my phone, should I get a bit too far away.

This is My World on Tuesday. 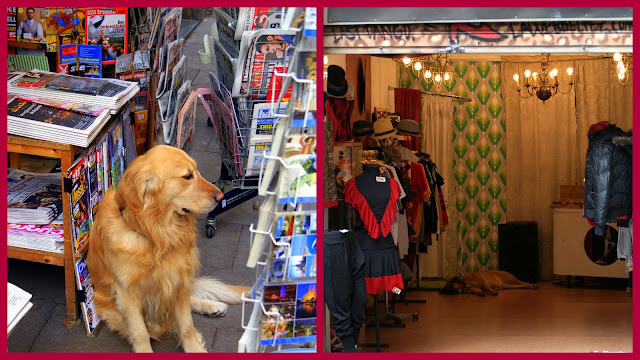 This is for My World Tuesday. Check it out!

Photo taken in the… Born, near Saint Mary of the Sea, Santa Maria del Mar.

If you are a regular follower of this blog, you might have noticed that I love balconies, with or without asses! Here is a nice one, spotted in the Born-part of the old town.

Balconies…  My world…on Tuesday! Only one click (here) away! Sheer bliss awaits you!

Asses on the balcony

Want to know more? Just google and look for images about… wait for it…KUKUXUMUSU! Some really really good designers!

The potter’s shop/ part 3 and end

Told ya I love this shop!

Happy Halloween to everybody!

Some more views from the potter’s shop. Don’t you just love the staircase!

Found this beautiful shop 2 weeks ago in the Born area, near Ciutadella park. Beautiful things, beautiful surroundings, just everything to please the senses.

You might notice the little guy looking up, looking at us. Shall we call him Harry? 😉

Gardens in the city

Some have small gardens, some have big gardens.

I found all of them in the old town, the Born area.

Of all train stations in town, this is by far the prettiest.

You might have seen it in the news, but if you haven’t: there have been violent clashes between 700 or so ‘anti system people’, as they call them on TV, and several hundreds riot police yesterday afternoon, less than 100 meters from where we live. Burned car, burned and upturned bins,tear gas, 59 people arrested, 58 injured. A lot of violence.

We passed the Palau de la Musica yesterday, and I just can’t resist showing you the facade.

This is for My world Tuesday. Click here to see more.

I am having a very busy week, barely any time to browse your blogs. Will be back asap.