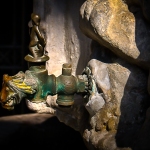 You all have taps in our house, I suppose… This one, in the cloister of the cathedral, is better! 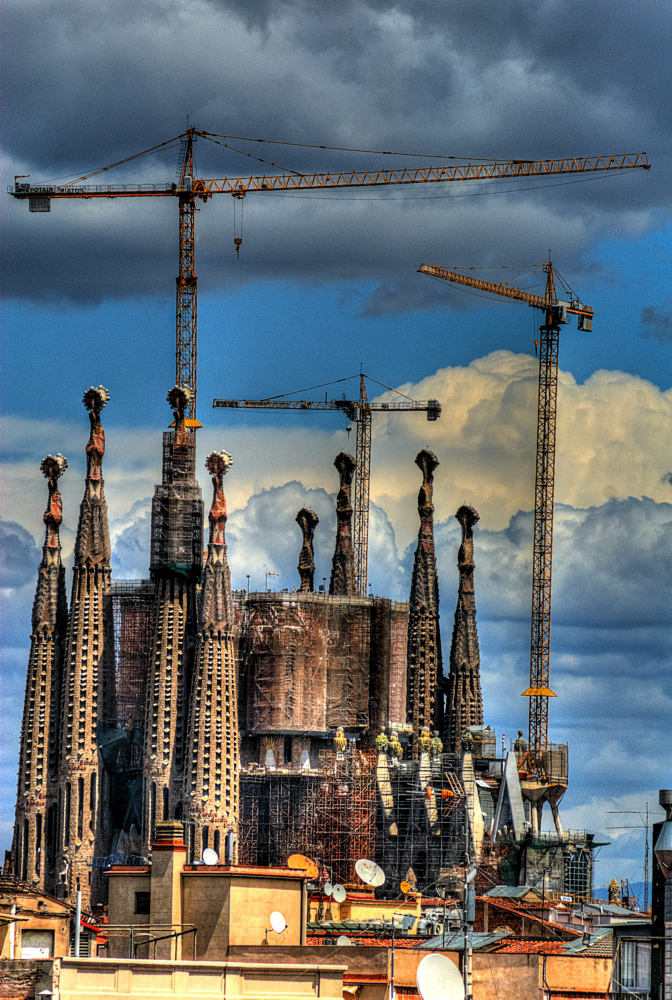 The Cathedral, as seen from my wife’s office. Well, what can I say…

Should anyone have lost a blue eyed alien, he was in front of the cathedral a few hours ago, looking lost 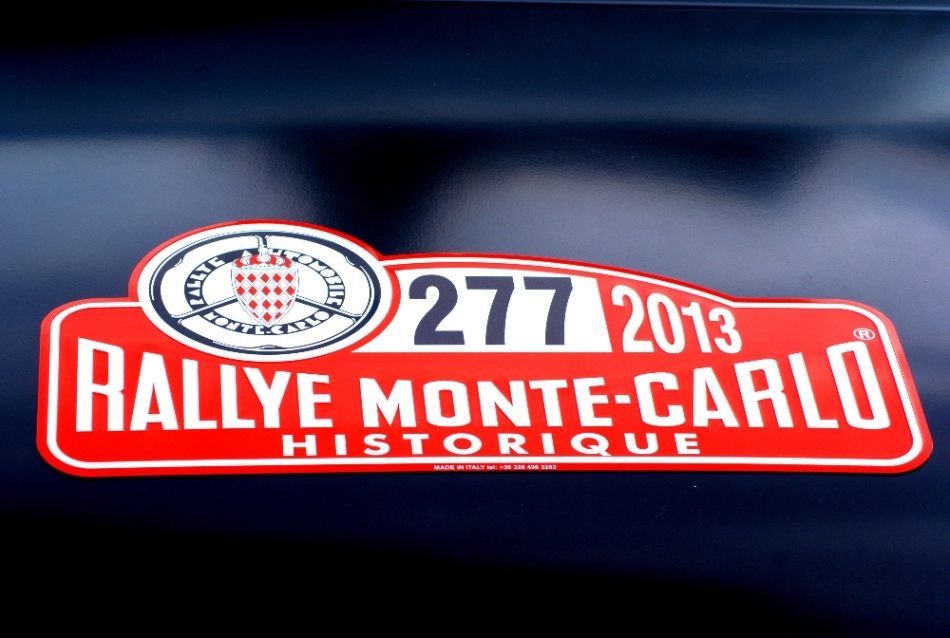 Well, not quite… Barcelona is one of the concentration legs of the 16th Historical Monte Carlo Rally. Historical meaning in this case that the cars are from between the 50es and the 80es. Here are some of them. 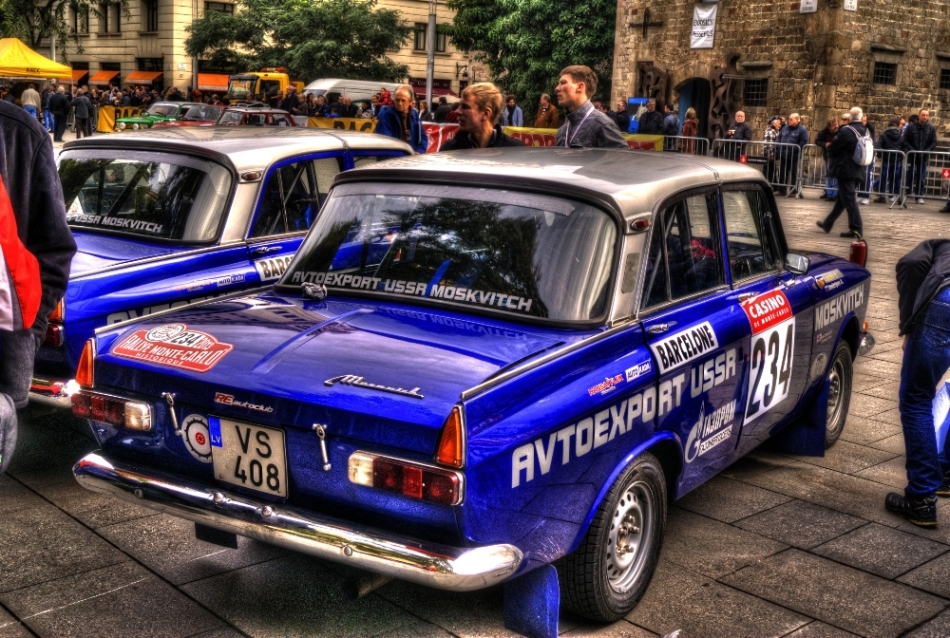 Some more info about the Rally here. And you might be able to see them arriving in Monte Carlo, 684.5 km away, on Jilly’s Monte Carlo Daily Photo Blog, if she can make it of course.

I was right behind you 2

Having a peek into the city archive. 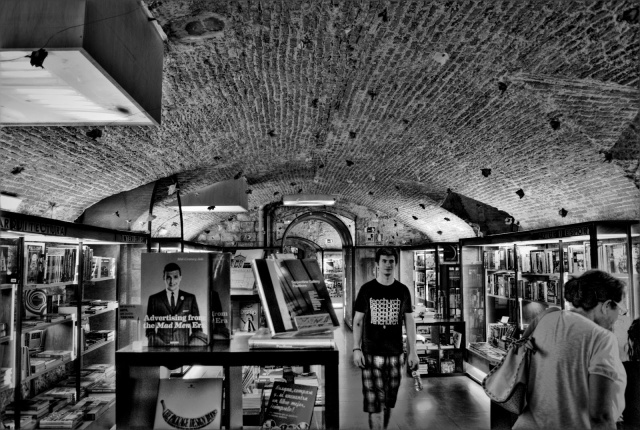 La Formiga d’ or, or golden ant, is one of the nicer bookshops in town. We just love the place, being giant bookworms. There are 2 of them in town, one in the cathedral’s cloister, and one nearby. Both have a very medieval feel. What’s your favorite bookshop like?

The weekend in black and white.

I was right behind you 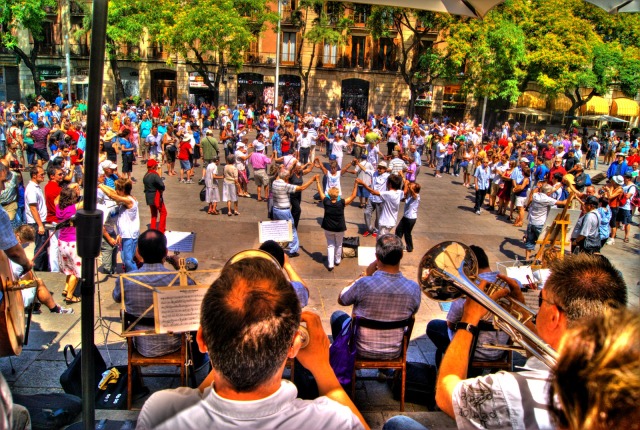 Sunday ballads and dancing at the Cathedral.

Thanks to JM for the title!

Some tourist… taking the sun, so to say. It is finally raining all over Spain, and God we needed it! Very dry spell so far this year. We had a massive thunderstorm here last night.
Message to all tourists in town: we have well over 80 museums! Enjoy! 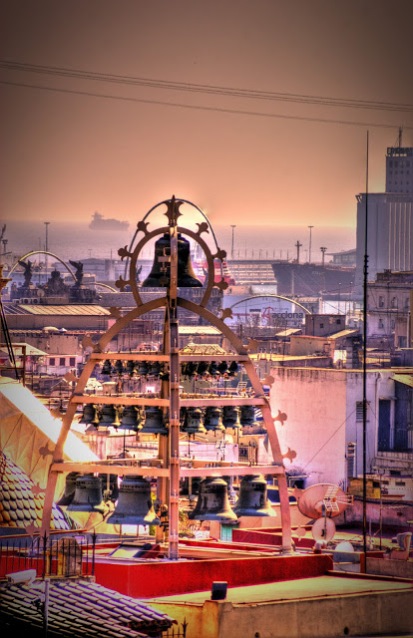 Nice glockenspiel spotted from the top of the cathedral.

Santa Eulalia: the cloister and the powder room

A last look at the magnificent 13th century cloister in Barcelona’s Saint Eulalia cathedral, and the garden within…

…and the 13th century urinal (yes, you read it right), which has now a section for the lady in need as well.

Back to the cathedral. Some of the sumptuous stalls in the choir, with the emblems of the  Knights of the Order of the Golden Fleece. The order held it’s 19th chapter in the cathedral in 1519. More about this order here.

And happy spring to everybody!!!

Paella with a twist!

You don’t see this everyday… Well, in Barcelona, you do, right outside the cathedral! The guy is having a head-start with his paella…
Anyway, here is one of the many many real paella recipes.

Our world Tuesday, of course! 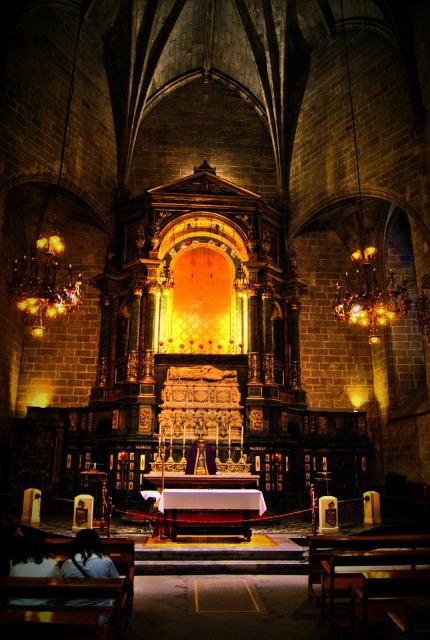 It has been a while I hadn’t been back inside our cathedral, and I ad almost forgotten how beautiful she is. Above, some of the 13 geese living in the Gothic cloister. 13, because Santa Eulalia was 13 when she was martyred by the Romans under Emperor Diocletian, and they subjected her to 13 different tortures. That’s European history for you.
Why geese? She was a geese shepherdess. 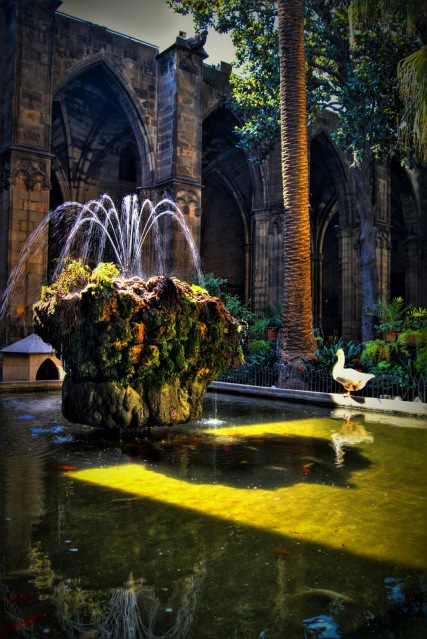 Many more interesting things in the cloister, even a 13th century urinal… Will show you much more during the coming week!

A very nice candle shop, just behind the cathedral shown yesterday. I will come back to the cathedral and it’s inside in a few days.

The Cathedral of the Holy Cross and Saint Eulalia (Catalan: Catedral de la Santa Creu i Santa Eulàlia, Spanish: Catedral de la Santa Cruz y Santa Eulalia), also known as Barcelona Cathedral, is the Gothic cathedral and seat of the Archbishop of Barcelona, Spain. The cathedral was constructed throughout the 13th to 15th centuries, with the principal work done in the 14th century. The cloister, which encloses the Well of the Geese (Font de les Oques) was completed about 1450. The neo-Gothic façade was constructed over the nondescript exterior that was common to Catalan churches in the 19th century. The roof is notable for its gargoyles, featuring a wide range of animals, both domestic and mythical.
The cathedral was constructed over the crypt of a former Visigothic chapel, dedicated to Saint James, which was the proprietary church of the Viscounts of Barcelona, one of whom, Mir Geribert, sold the site to Bishop Guislebert in 1058. Its site faced the Roman forum of Barcelona.
It is a hall church, vaulted over five aisles, the outer two divided into chapels. The transept is truncated. The east end is a chevet of nine radiating chapels connected by an ambulatory. The high altar is raised, allowing a clear view into the crypt.
The cathedral is dedicated to Eulalia of Barcelona, co-patron saint of Barcelona, a young virgin who, according to Catholic tradition, suffered martyrdom during Roman times in the city. One story says that she was exposed naked in the public square and a miraculous snowfall in mid-spring covered her nudity. The enraged Romans put her into a barrel with knives stuck into it and rolled it down a street (according to tradition, the one now called Baixada de Santa Eulàlia). The body of Saint Eulalia is entombed in the cathedral’s crypt.

Barcelona’s holy patron is Saint Eulalia, also called Laia. She was a geese shepherdess in the village of Sarria, now a part of Barcelona. She was a martyr, was killed for her faith by the Romans, says her hagiography.
Nowadays, the cathedral in the old town is named after her. And in the cloister are living 13 geese. Why 13? Eulalia was 13 when she became a martyr.

Due to some spam comments lately, I had to change the settings a bit. No anonymous comments allowed for the time being, just as a protective measure. And because it’s really annoying. 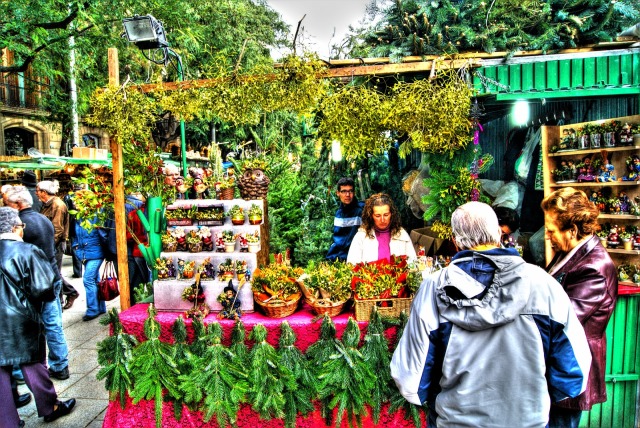 Theme of the month: fences 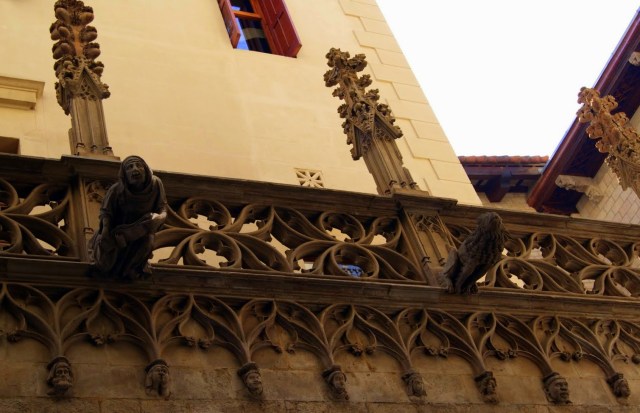 Fences. Here is a medieval one, complete with gargoyles. Happy belated Halloween, everybody!

This is a mediterranean photo. Although the photo was taken in Barcelona, the food depicted can be found all around the Med, Turkey, Italy, Israel, Algeria, and further away. I read years ago in the National Geographic that people living on a mediterranean diet (they mentioned olive oil, lots of garlic and some red wine) live longer. It is probably true, and what is even better: the food is delicious!

900 posts! Who would have thought… 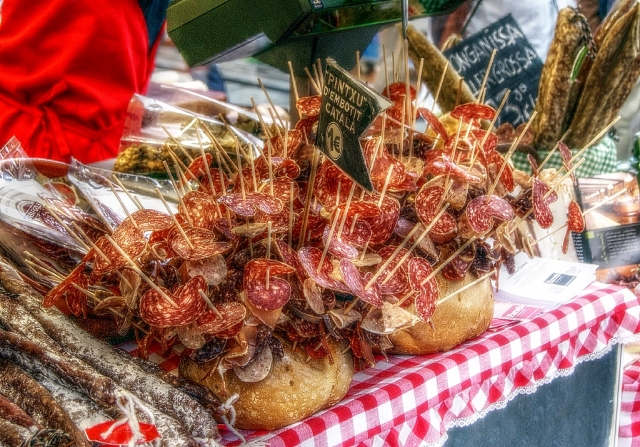 This weekend, we’re having here the mercat dels mercats, the market’s market, the best of all markets around. I love what they did to these sausages!
Private message to the All Blacks: very well done, mates!!!

We’re having right now the annual festival of the area around the cathedral. For the 422nd year in a row! I suppose this guy is part of the festivities. Very nice outfit!

Now… Why is this guy upside down, you might ask… Well, several reasons. 1- he is an artist, an acrobat. 2 – he is Australian, he probably thinks we’re upside down, not him. Therefore the strange pose. 3- that’s the way he makes a living. 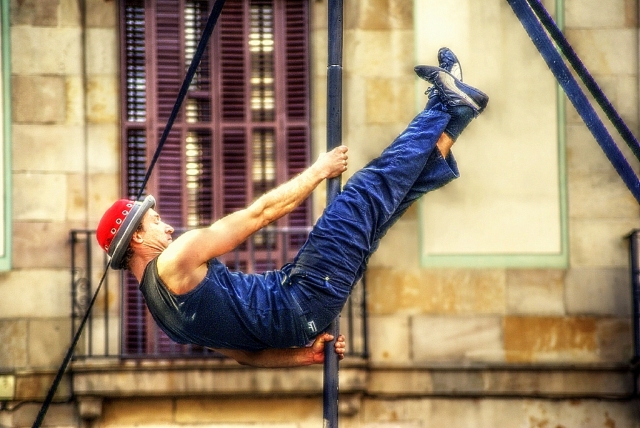 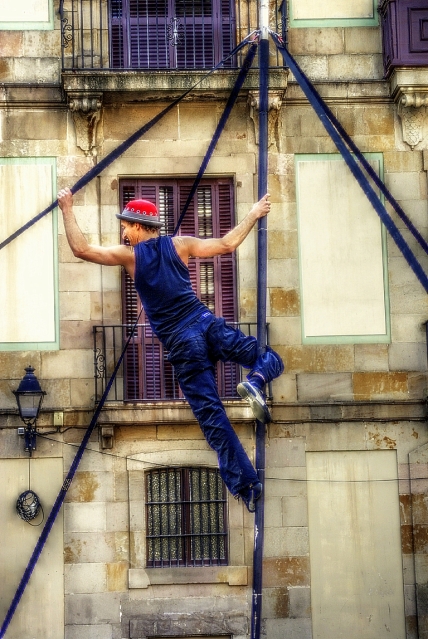 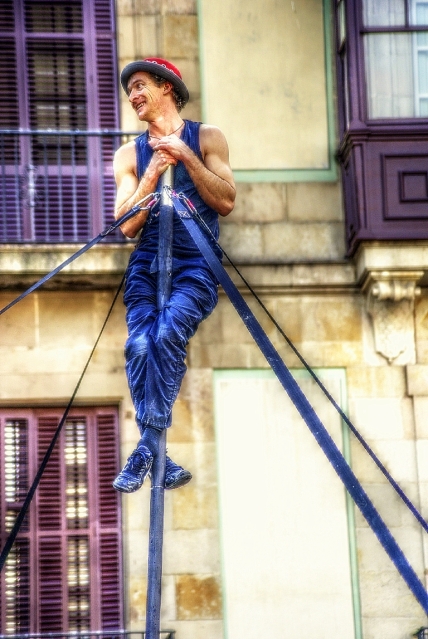 And a big HELLO!!!!! to all our friends, family, followers and supporters in Oz and NZ!