We went to see Alegria, by the Cirque du Soleil (no photos allowed), last night. The light on Montjuic Hill was fantastic.
Have a good Sunday, everybody.

The silhouetto of a man…

It is theme day again! The theme, you guessed it, is silhouette. Please click here to see other participants’ interpretations.

Update. I had posted a Queen video here, but it seemed to interfere, to create unwanted popups. It is not the first time it happens, beware of what people hide in Youtube! So, I removed it.
The video? Bohemian rhapsody, of course!

One I made before…

…in January, at the Catalan Circus Raluy. I only turned the photo into black and white, no other treatment or mistreatment.

August 1, 2012 | Categories: black and white, circus, monochrome, raluy | Comments Off on One I made before…

A black and white rendition of the circus we went to a few weeks ago, for Dragonstar’s Weekend in Black and White.

I usually avoid posting blurred photos, but sometimes it just works out. The sales lady, and, below, what she was selling.

Our World on Tuesday, of course! 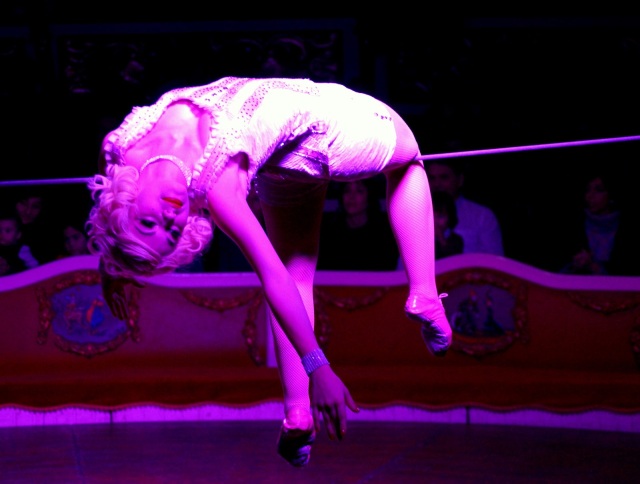 We went to the circus last night, for the first time in many many years (over 30 for Rob)! Was great! The Circ Raluy, traditional Catalan circus founded in 1911, and still operated by the same family, Raluy. Will show you some more of it in the coming week.

I was particularly moved by the many references to Federico Fellini’s La Strada.

On my way to a jazz concert and a firework the other night, I saw this guy on a huge bicycle pulling a toy train full of kids along some rails. The train stopped at the station, and the driver had a rest, and a chat with some people, one of them being the lady with the hat in the foreground. I felt I was in a Fellini movie.