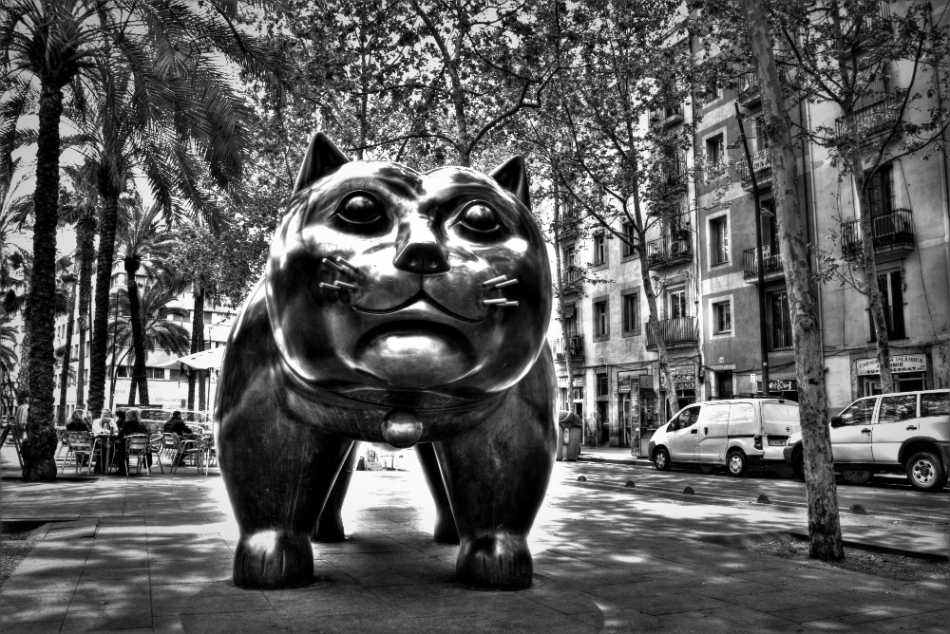 Been a while… Fernando Botero’s cat in the Raval.

La Rambla del Raval is the center of the Raval area of the old town. This is very close to where we live. Nice place for a kebab or a mint tea, or a chat amongst friends! It is also here that you can find Botero’s Cat, El Gat.

Barrilonia, house of the rebels

Barrilonia, the house of rebelling people, is a very colourful house on the Rambla del Raval, near Botero’s Cat.
The name Barrilonia is a contraption of barrio, neighborhood area, and, of course, Babilonia, Babylon.
The house itself is a kind of political art and workshop center (here is their website, for those interested, in Catalan). It seems to be very cosmopolitan.
Several interesting graffitis on the house front, particularly this one.

La Rambla del Raval, yesterday afternoon. The Raval is a part of the old town also know as Ravalistan, due to the high number of Pakistanis living in the area. In the 1920es, it was known as Chinatown…
Anyway, 2 policemen on duty are watching, so that nobody graffities Botero’s Cat, further down on the square. Spanish police uniforms are quite fierce, they look more like paratroopers than like your friendly neighborhood cop.

Here is the same picture after playing a bit with it.