If you are lucky enough to be in Sitges in 2 weeks, you will enjoy the floral festivities. The whole city is covered with living carpets made of hundreds of thousands flowers. This year, it will be on the 6th and 7th of June. Don’t miss it!

A flower, just for you

The Corpus Christi celebrations in Sitges, last Sunday. over 160.000 carnations used to transform the narrow streets into lush carpets.

And here is how they did it.

After an hour or more on the beach, you just need some shade. There are marvels in the shade, just off the beach in Poblenou…

Specially for all the mamas, mothers, mums, mamacitas, as it is mother’s day in Spain today.

Walking down the Ramblas…

… is always a great pleasure, watching people, street entertainers, animals, flowers… Haven’t done it much lately, too cold, too tired, too busy… Any reason. Got a foot problem right now, quite painful, so I’m not going out much lately, just to work. Anyway, now that the nice spring days are coming back, will try doing it a bit more.
Oh yeah: got a thing for cacti!

Some flowers, and a bee, picked up here and there in Catalunya

Have a nice Sunday everybody, full of sunshine, ice creams, walks in the park and flowers.

A bit of explanation… This is a flower box in a restaurant, just next to a pool at Barcelona’s Casino, and what you see is the water reflected on the wooden box on a very sunny day (last weekend).

This is for James’s Weekend Reflections meme. Check it out, right here!

Get yourself a cactus, and love him!

For sale on the Ramblas right now. Save a cactus! 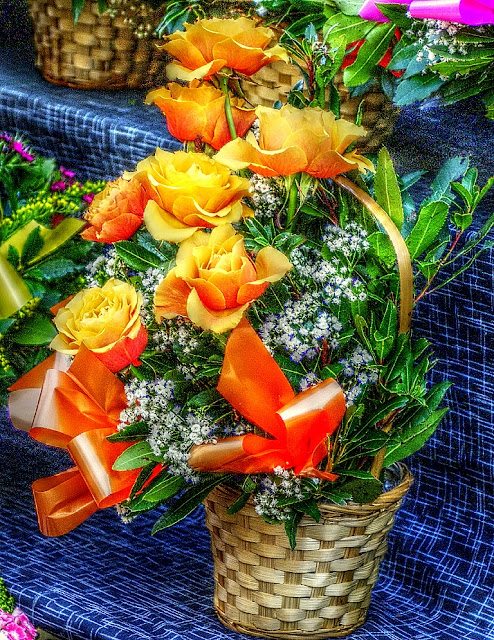 Sunday evening. The weekend is almost over (…). We had a relatively sunny day, after the wettest Saturday in ages. The forecast for the coming week is very bleak. So, what will I post for tomorrow??? Something colorful, something nice to brighten up the coming week. Here it is, spotted on the Ramblas, with the help of a bit of LDR.

Oh yes, we had a little sunshine… Welcome to Lori from District Daily Photo, our 405th follower!

El Señor Iniesta, famous football player from the Barça, seen shouting at oranges on the Ramblas. Why would you shout at oranges?

So, well: merry Christmas to all of you celebrating it, happy holidays to others, and, finally, have a good day at work to some others! You know who you are.

Saw this lady in red, with dog, in a fashion shop near the cathedral. Wouldn’t you ladies want a dress made of roses?

Some flowers for y’all.

Gardens in the city

Some have small gardens, some have big gardens.

I found all of them in the old town, the Born area.

We have some sunflowers growing on our terrace, and it has been fascinating to observe the different stages of the growth.

Some flowers for you all

Went on a tentative stroll through Gracia today, with a camera, to check the limits of my momentary strength. Doing good!
And we found this lil’ old lady selling a couple of flowers (back of the 2nd photo, hiding in the bar, white top, pink bottom).

And you know what happens then??? They win prizes! And then, they get some signs tu put on the walls of their houses, saying ‘this is a most flowered house’. Or so. I don’t know if they win anything else than the admiring glances of their neighbors or passerbys. Or occasional tourists like us.

This said, this is a photo of one of these most flowered houses, in Sitges, in the city center. This house won many prizes, for many years. They were about twice more of these signs, but I somehow had to frame this photo, and I still wanted the signs to be recognizable.

One small thing though… It was winter, 2 months ago. Not a single flower to be seen, anywhere… So… I’ll be back!

Do they do the same where you are? Do they win prizes?