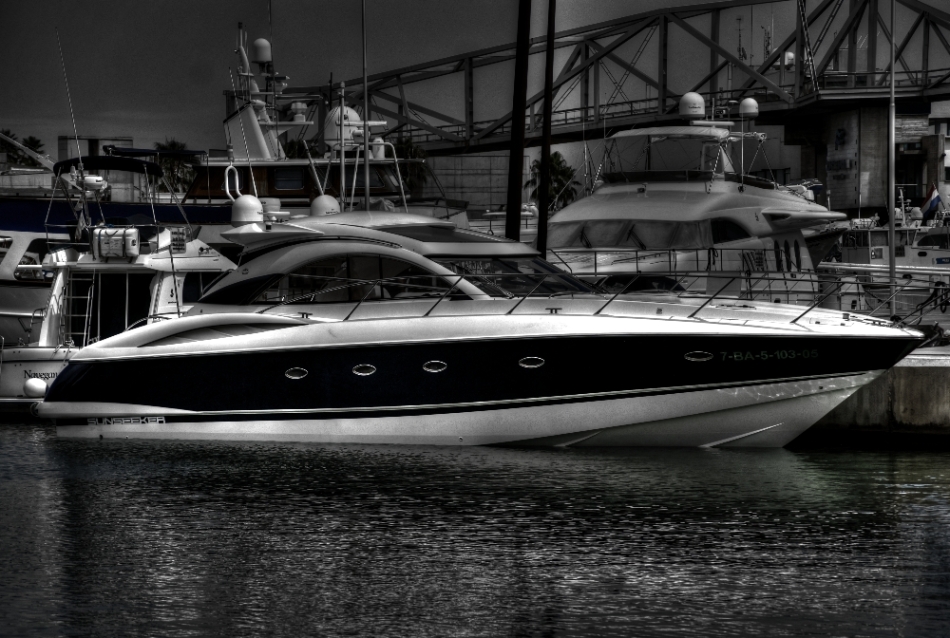 … and posted on my other blog. 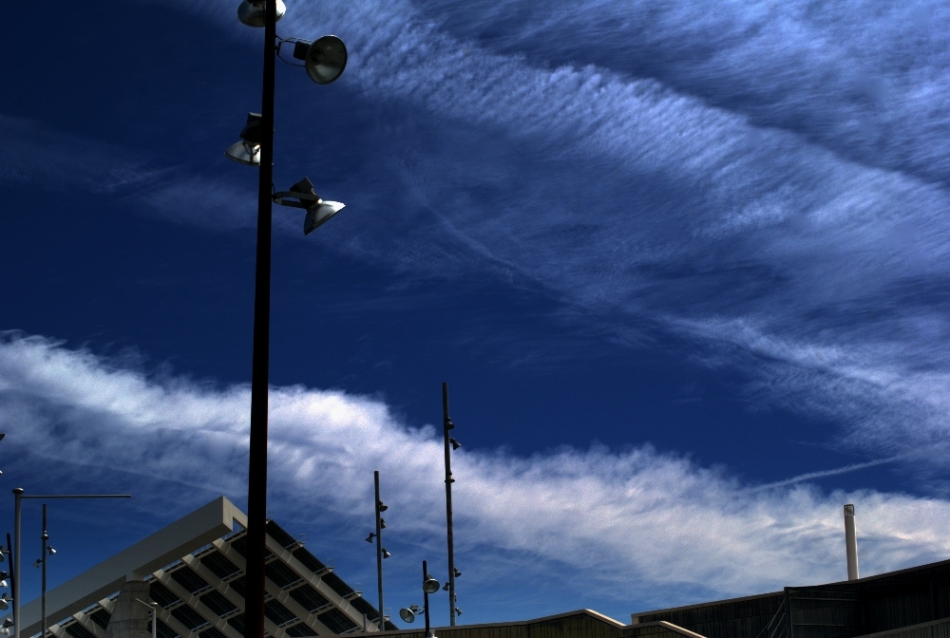 Nice thing to do on a weekend. Or on a week day. You know, instead of going to the office…

The silhouettes of young men…
Please check out what the other participants did for Skywatch Friday.

Incidentally, I learned yesterday that in what once was one of the biggest fishing port in the Med, there are only 45 working fishing boats left in Barcelona, barely making a living, and often coming back empty. Shame.

Watery Wednesday… Looking at the Big Blue Med from the Forum area, with a few lamps in the foreground for the happy yachtsmen and women.

Monsieur Louis la Vache, apart from having a very nice blog and a balcony with a view, also has a weekly meme about bridges every Sunday. So, this is our entry, the pedestrian bridge just behind the big and very expensive hotels in the Forum area. Enjoy some more photos and bridges right here! 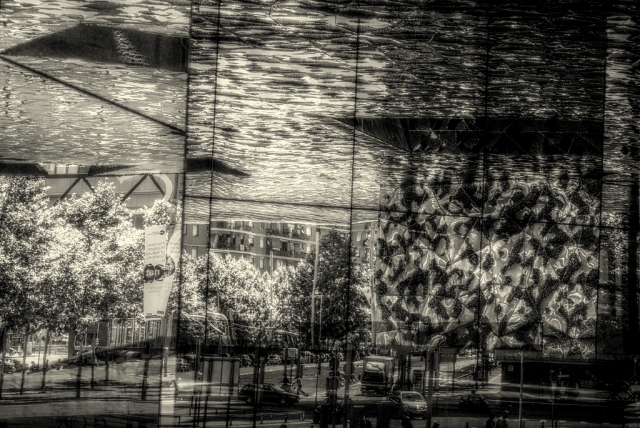 This is not an easy picture. It was taken at the Forum building, which is a paradise and a nightmare for photographers, all at the same time, with it’s unlikely shapes, and with so many reflective materials.
Well, have fun trying to make sense of it! It probably helps if you make it bigger.
This is for Dragonstar’s Black and White Weekend in Ireland, and James’s (formerly from Newtown) Weekend Reflection meme.

After reflection (…), here is a color version of the same shot. Might help. 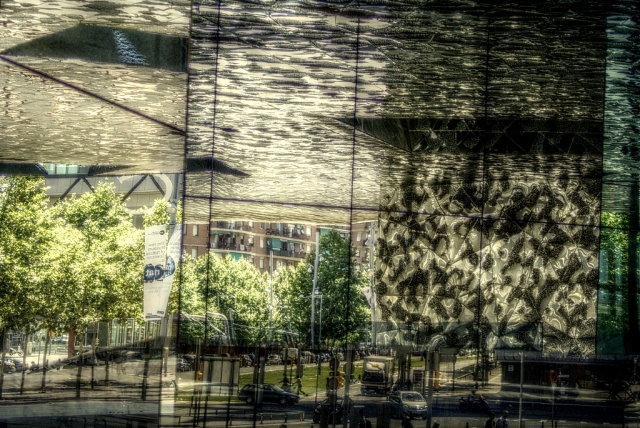 Oh look: that’s me!
After first posting this on my other blog, I decided to delete it there and to re-post it here. Photo taken 2-3 days ago behind the Forum area, close to what was originally planed as the new maritime zoo of Barcelona, before our new Mayor decided to forget about the project. Anyway, enjoy the skyline, with all the 4* hotels and very expensive apartments (with a fantastic view, I agree).
I have been posting beach photos for a few days now. After thinking a lot about it, I decided to post some photos from the naturist beach in Barcelona in the above mentioned other blog, as I have been a practicing naturist for longer than I care to remember. Why the other blog? No hypocrisy, just the wish to spare some people’s feeling or beliefs (not getting too many visitors over there). If you don’t want to go there, then just don’t. It is my strong belief that we are all equal, and that we do not have to be ashamed to be as God made us. Or Mother Nature, call it what you wish. Would you be ashamed of showing a finger or, I don’t know, maybe your forehead? Why ignore our bodies?
And it is very nice not to wear a wet or/and sandy swimsuit, believe me!

Anyway, enough rambling! This photo above was taken for James’s Weekend Reflections. Please check what my blogger mates did this week! 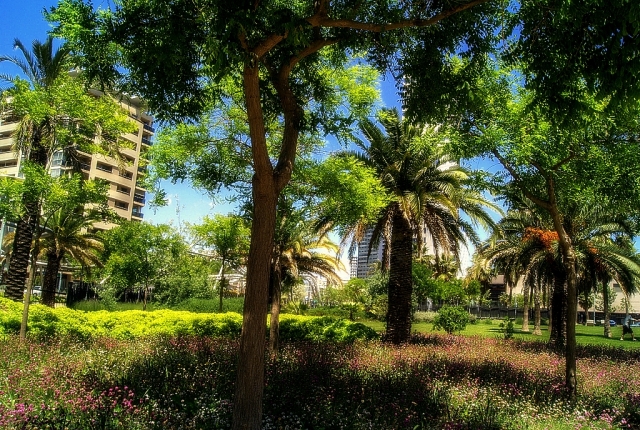 Now and then, in the big city (and BCN has approximately 2Mio. inhabitants), you can find a spot where you could imagine you’re millions of miles away.
This said, to accentuate this feeling unwittingly, I was standing with both feet in an anthill when I took this picture on Sunday. I moved out quite fast!

This is My World on Tuesday, full of ants and magic places. 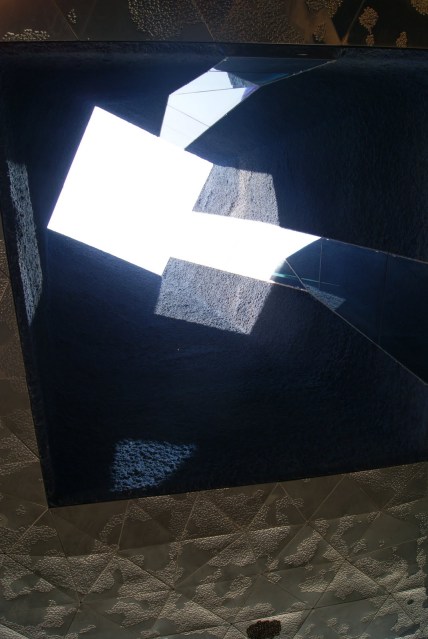 I showed you an inhabitant of this place a few days ago, a lovely stuffed goat. Well, this is where the goat lives. It is an equilateral triangle 180 meters on each side, 25 meters high. It was built in 2004 by the architects Herzog and De Meuron. It hosts now the Museum of Natural History, aka the blue museum.

A few random pictures from in- and outside. 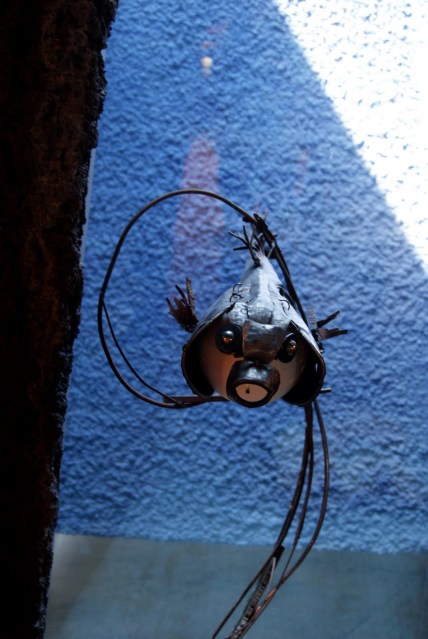 This is for James’s Weekend Reflections. Have a look!

One of the friendly exhibits at the brand new Museu Blau, the blue museum, aka the Museum of Natural History. The building itself is…a weird dark blue ‘floating’ triangle and so built that is is a bit of a challenge  getting good pictures of it. Well, I tried, you’ll see the result…soon.  Meanwhile, you can always have a look here. 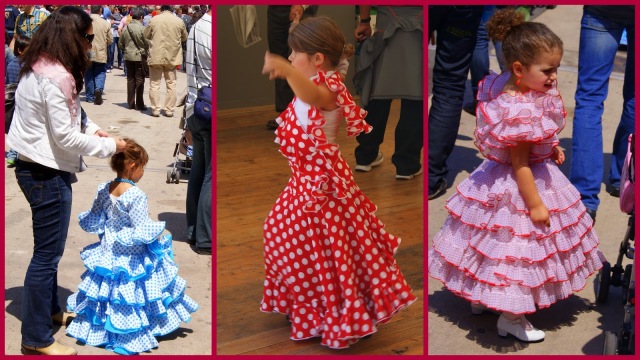 At the Fiera de Abril.

The 40th Fiera de Abril is in full swing! Big annual 10 days party organized by the southerners in Catalunya, people from mostly Andalusia, the fiery ones. Music, fancy dresses, food, fun!
Lots and lots of food!!! Some more photos… 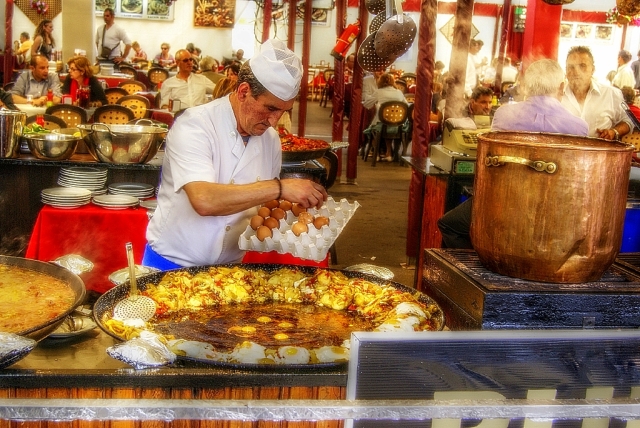 We will show you more about it during the next few days.
And happy 2nd blogaversary to our good friend Leif, from Eagan Daily Photo! May you have a fantastic 3rd year!

A good bit further north on our boat trip along the Barcelona coastline. This is the area called the Forum. Until the Olympic Games in 1992, this area was a dilapidated industrial zone, empty factories, lots of bad chemicals in the ground. It was totally revamped in time for the Games. The area is also composed of the old village which used to be here, Poblenou, and @22, a kind of gigantic techno hub. It is partly a huge building site.

What you see are several of the best hotels in Barcelona (the most expensive, anyway), literally 3 minutes from the nearest beach. Hilton, Princess, and so on. Just behind is one of the biggest shopping malls in town, Diagonal Mar, and the Barcelona Convention Center. And the blue wall on sea level is the beginning of the Port Forum, the other marina in Barcelona. Some of the huge yachts in there even have helicopters on deck.