Stands for Agua de Barcelona, the waterworks. The tower. The tower has obviously many nicknames, none of them having with do it’s actual function as an office building. The most popular of them is about… male waterworks… Very unfortunately (to me, anyway), to access the top floor, you have to work there. Open to the public is the ground floor, where they tell you where to pay your water bill.
The thinggy is actually blue, you know. And french.

One morning, going to work…

And one more early December sunrise, for Skywatch Friday. It kind of gladdens my mind to see this just before starting my working day at 8 AM.

… spent watching the sky. Well, this photo was taken last Tuesday from my office, around 7.50 AM, with my phone. Yet another magnificent December sunrise above the Torre Agbar.
You will want to see Skywatch Friday, wont you? It’s here.

The sky over Barcelona yesterday at lunch time, as blue as it gets. Skywatch Friday, right here!

The skyline, as seen  from my office at around 7.45 AM. Getting a bit cold in the morning now, had to wear a light jacket for the first time since march.

Skywatch Friday, a wonderful meme. Check it out here.

I went to a shopping mall nearby yesterday, and guess what? I saw some strange things going on.

Dude, where is my chicken?

Some Tshirts hanging on a wooden wall… Want to know more? You can go there:

I didn’t check it out. I mean, what’s the point? 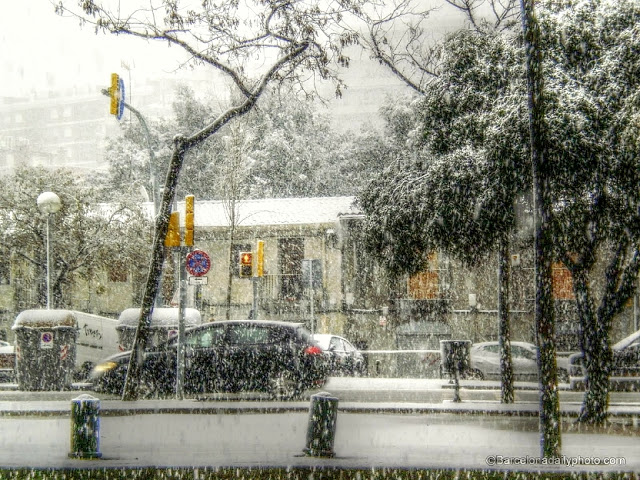 … the worst snow storm since 1962, said my elderly neighbor. All of 2 inches, 5 cm, incredible!!!
Yes, even in Barcelona, we have snow! Well, sometimes. And when it does, books are written about it! Got one of them!

Yep, it is Tuesday, and this is our world! Click here please!

Yet another flamboyant early morning in Clot.

Skywatch Friday! Check it out!

Going to work yesterday morning, this is the view I found waiting for me at my office. It kind of brightened what became a grey, cold and rainy day.

After the rain… A last picture from our terrace.

We’re changing house this weekend, and it will take a couple of days to get internet set in the new place. So, unless we find the time to go to an internet cafe, this blog will be shutting down for a little while. See you all very soon.

This is of course for Skywatch Friday, season 4, episode 3.

I am lucky enough not to have to commute, as my office is 3 minutes away from where we live, walking distance. Mandy commutes for 2 1/2 hours everyday.
These are the reflections seens this morning, a nice sunshiny day, with some majestic cloud formations over the sea. They are actually my office’s windows, seen from our terrace.

Oh, it’s my birthday today, Rob that is. I am now a follower of San Francisco’s 49ers. For 1 year.

And yet another fine sundown, as seen from our terrace.

Another picture of the gorgeous Barcelona sky, taken as usual from our terrace.

It has been a while since I last posted the AgBar tower, the Agua de Barcelona, the waterworks here, HQ. Well, here is a close up. There are many people working in there, many offices. Shame that you can’t actually visit it!

Blue in the night

We’ve had a few rainy days lately. Rainy day: dry day with one or two 15 minutes long… events, where you think the end of the world has come, when it is raining so hard you can’t see anything anymore, with hail and thunder, when the day becomes night. You know what I mean.
But the good thing about it, apart of the WOW, NATURE ROCKS!!, is the beautiful light it brings.
So, here is a few over the roofs of my area, Clot, taken from my terrace, 5 minutes before one of the storms started.

There is this absolutely beautiful house just down the road from where I live, at the corner Meridiana and Consell de Cent. I don’t know anything about it. Was it built between 1914 and 1918, does it commemorate something? If anyone knows anything about it, please do let me know. Thank you!

I am living just down the road from the Encants Nou flea market, one of the oldest flea markets in Europe (since the 14th century!). It’s called nou – new – because they moved to the present location 80 years ago, and will move again soon. 100.000 people pass through here every week, and you can find… everything, just absolutely everything.
Well, I found these 2 angels and the Virgin Mary. It reminded me somehow of the movie I saw the other day, Night at the Museum 2. Watch it, you’ll understand.

Several things are really important here in BCN: food, politics (and I will come back to this subject later – objectively, through my lens only!), and…
FUTBOL!
The Barcelona Futbol Club, aka Barca, pronounced Barssa, is on it’s way to glory. And it eclipses everything else, crisis or not.
Picture taken in a chocolate shop. It says : more than a club. Buy your european cup, pictures of players, medals, etc, all in chocolate. God knows I’m not a football fan, but chocolate is definitely my thing!!!!!

A very popular and cheap way to go around town is the municipal bicycle rental, Bicing. It’s easy: just take a bike from one of the stands (200 or so of those), and drop it on another stand when you reach your destination.
The same idea, which originally started here as far as I know, has been taken over by Paris and Washington DC.
PS: several people asked me fora a picture of the Torre Agbar at night. Well, it’s coming, friends! But not quite right now. Bit of patience required.

I am a really lucky guy! Yeah! Amongst other reasons, I am fortunate enough to have a large terrace in my flat on the last floor of my building, and this is the view! The thing in the back, the same you can see in the title bar, is the Torre Agbar, Agbar Tower, so called because it is the headquarter of the Barcelona Waterwork, AGua de BARcelona, therefore AG BAR.

A few facts… 142 meters, built by the french architect Jean Nouvel, sustainable, and illuminated at night (on weekends and public holidays). They also have a nice website, http://www.torreagbar.com/, check it out!

Anyway, this is the view from the breakfast table!!!

Oh yeah, before I forget… Thanks for all your comments, nice morale booster! And I am extremely happy to welcome my first follower, Julie from down under!

By day, it’s a haberdasher shop. Boring!
But by night, when the shop is closed and the curtains are drawn…
Here comes Lucky Luke!