Gracia from A to Z

Another street in Gracia, the theme for this one is A to Z, all about letters. Here is how it looks on the floor, with the strong and hot sun we’ve had for months now. Anyone wanting to send us some rain will be extremely welcome and popular here! They’ll probably even name a street after you!

Every august, in the Gracia area, there is a big festa, with a lot of music, food, drinks. And whole streets get decorated with recycled materials. The theme for this street was…you guessed it, under the sea!

… and now to the weather report: mainly clear blue sky, with few clouds. Some vultures.
Yep, that’s the Festa Major in Gracia for you! And, as it is Friday, it is Skywatch Friday!

So, what can you do, when you’re a dog. You can either lay in the water, or drink it. Or both of course. Happy dogs, wish I could have done the same. I mean lay in the cool water…

One of the many many places to hang around in Gracia.

Letting your hair down

Should you feel the need to do so, this seems to be a good place for it.
It’s a hairdresser, by the way.

You just have to keep your cool!

One more detail of the street decoration during the festival.

And another detail…
We were away for a few days, in Andorra and Madrid. Back to normal tomorrow.

A detail of the fantastic street decoration, made of recycled plastic bottles.

Yes, there is even this… 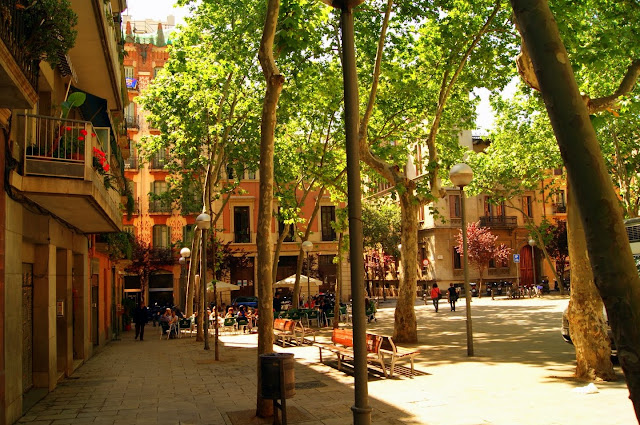 …is without a doubt Gracia!

This is also for My World Tuesday.

Festa Major de Gracia, and the winner is…

The Festa Major de Gracia is finishing. 17 streets were decorated by there inhabitants with recycled materials.
Every year, a committee decides which one will get the price for the best decoration. This year’s winner is Calle Verdi, for the 4th time in the last 5 years, with this enchanted forrest. Unfortunately, they didn’t say on their website what exactly they won, apart of the admiring glances of bystanders and some bottles of Cava, the local bubbly.

Even more colors in Gracia…

We are starting today a few posts about the yearly Festa Major de Gracia, which starts today. Gracia is the arti part of Barcelona, the place where everybody under 30 wants to live and party.
Every year, a dozen streets in Gracia are decorated, with a different theme for each street. An amazing fact is that absolutely everything is made from recycled stuff.
But honestly, not quite sure what the theme for this street is…

2 very different types of graffiti, found 2 streets apart. The first one is someone’s artistic expression, and he or she is really good.

The second one… Well, it does what it says on the box, I suppose. And this is one of the things I really like here: how to make a dull grey shutter look alive!

Some flowers for you all

Went on a tentative stroll through Gracia today, with a camera, to check the limits of my momentary strength. Doing good!
And we found this lil’ old lady selling a couple of flowers (back of the 2nd photo, hiding in the bar, white top, pink bottom).

Found this in Gracia a few weeks ago, and it definitely is one of the nicer graffitis I’ve seen lately.

This is one of the most pleasant places to be here in the summer: Plaza de la Virreina, a nice shady and cool square in the heart of Gracia, with lots of cafes and nice shops around.

Just a house in Gracia

This might be just a normal building in Gracia, with normal flats inhabited by totally normal people, but isn’t it just lovely?

One of our main treats this month will be to watch the new Tim Burton movie, Alice in Wonderland.
This is what Barcelona had to say about it last summer during the Festa Major de Gracia, the cartoon way.

Recycled garden under the sea

During last summer’s Festa Major in the Gracia area, one of the squares was made up as a garden under the sea. Here is a small part of it. Everything is made of recycled materials. Great idea!

One nice way of hiding an unseemly shop curtain.. This is an archive photo, taken last summer during the Festa Major in Gracia (check out the new header, by the way!).

Street scenes at last summer’s Festa Major de Gracia. Every year, the suburb of Gracia organizes a spectacular one week long big party, with concerts, fire, theatre, and street decorations. This street’s theme was… Alice in Wonderland, of course!   And there was this big orange cat as well. No, his name is not Garfield! If you click on the Gracia label at the bottom of this post, you will find some more photos of the Festa.

Let’s finish this week centered on the Festa Major de Gracia with a bang, a big one! One street’s theme was, you guessed it, Big Bang. This is, I suppose, the creation of stars and planets.
And welcome to Vogon Poet!!!

A bit of a rest for your eyes, folks, not too much color today!

During all the trouble and noise during the Festa major, these 2 gentleman were just enjoying themselves at the bodega, watching the world go by. And probably having a drink. Nice!

And welcome to my 100th follower!

We would be so happy you and me
No one there to tell us what to do
I’d like to be under the sea
In an octopus’ garden with you.

Before I get into trouble: no, the lyrics are from the Beatles, not from me!!!

Festa Major de Gracia, day 2.
Amongst many many things going on, around a dozen streets or squares are decorated with recycled material. Each street has it’s own theme: a medieval street, a spooky one, Alice in Wonderland, Big Bang, and so on. One entire street has been transformed into a streetcar! Will show you later.
One of my favorites had the following theme: everything is fragile. This is what you can see hanging over this street. Once again, I repeat: all of it is made of recycled materials!
More to come!

Thanks to all for your comments and wishes!

Festa Major de Gracia. This is Catalan for Gracia’s main fiesta. One week of music, dancing, fire, drinking, eating, fairy tales, etc in the barrio of Gracia.
One of the most immediate things you see when you come into Gracia is the street decoration. Not any street decoration though: they brought it to a level and a scale I haven’t seen before. It is a photographer’s dream. And maybe the best thing about it is that almost everything is made of recycled stuff.
It is just amazing. Watch and enjoy.
When the festa in Gracia is over, the next one starts in Sants! Great! Many photo opps!!!

Found this on a wall in the barrio of Gracia, the leftist-artist-colony-like area just north of the city center. They seem to have a problem there, a real infestation.

I will tell and show you much more of Gracia during the following days, as they have their annual Festa Major, with some totally amazing stuff. You wont believe your eyes! Stay tuned, folks!

My Blog of note today is Nathalie’s very excellent Avignon blog. Visit her and tell her what you think, she’ll be delighted!