The centre of the universe 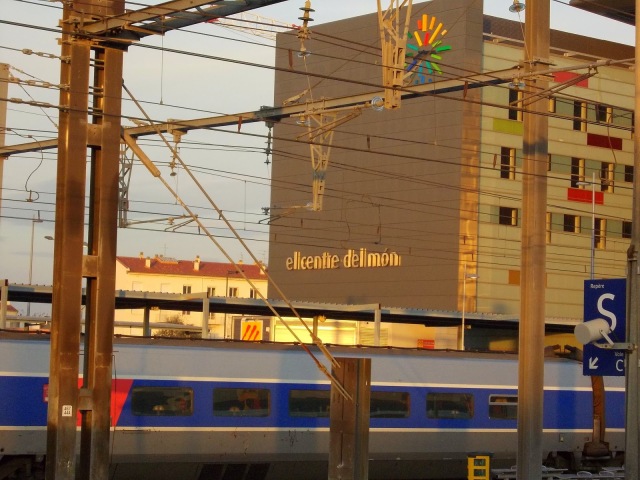 Following a visit in 1963, the Catalan surrealist artist Salvador Dalí declared the city’s railway station the centre of the Universe, saying that he always got his best ideas sitting in the waiting room. He followed that up some years later by declaring that the Iberian Peninsula rotated precisely at Perpignan station 132 million years ago – an event the artist invoked in his 1983 painting Topological Abduction of Europe – Homage to René Thom. Above the station is a monument in Dali’s honour, and across the surface of one of the main platforms is painted, in big letters, «perpignan centre du monde» (French for “perpignan centre of the world“). Or in Catalan, Perpinya, centre del Mon.

Yes, it is in France, but still in Catalunya.

During our recent short trip to France, north Catalunya, we came across this  feisty guardian. No, I don’t know you, you can’t enter.
In the UK and, I suppose, in the USA, the usual sign says ‘beware of the dog’. In France, they say ‘attention, chien mechant’ beware, nasty, vicious dog’. Are french dogs therefore nastier and more vicious than others???

The sun is going down over Catalunya.

Due to an ever increasing amount of work and other obligations, and a low level of energy, I am not able to browse a lot of blogs at the moment. As it is going to get even worse from September onwards,  I might actually be reduced to curtail my own posts to 2 or 3 a week. Come as it may, but I promise you quality!

There was an angel…

… watching over the market…

Let’s go back to the lovely city of Argelers de la Marenda, in north Catalunya, France. Here is what french do in the morning of July 14th, France’s national day, Bastille Day: le defile. The fanfare municipale comes first, of course… 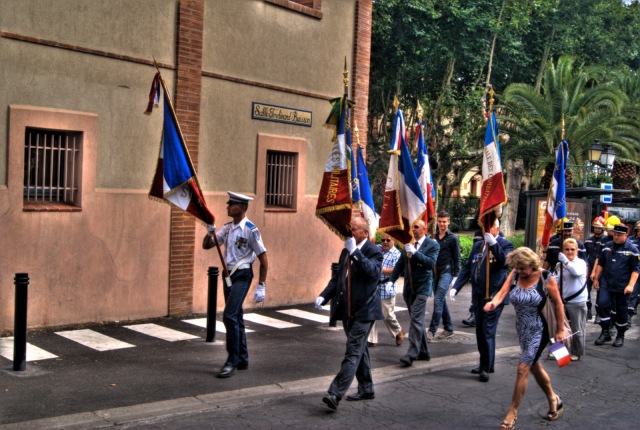 …closely followed by the veterans, 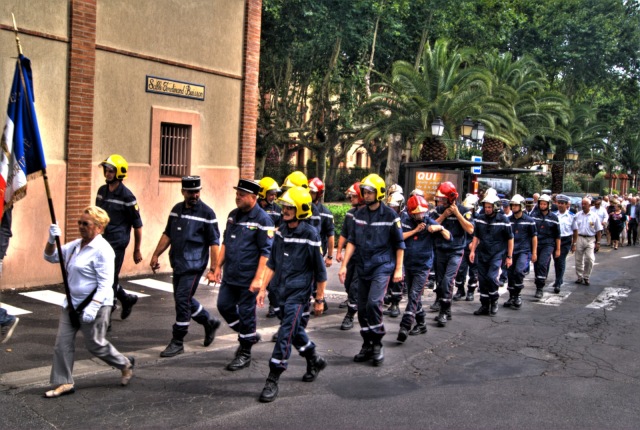 the firemen, aka pompiers,

police and the gendarmes. 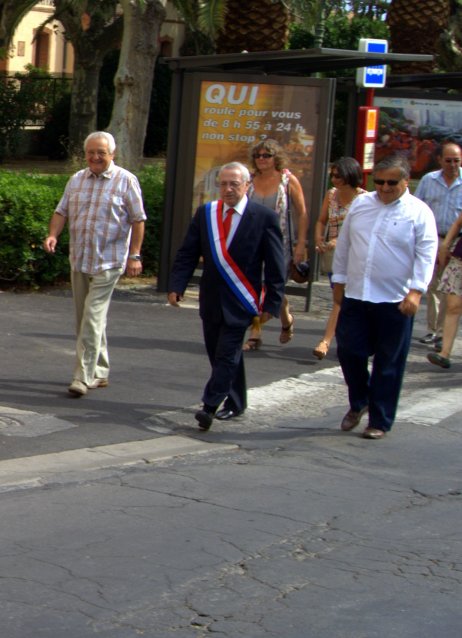 Some very colorful paints in this artist’s shop! All in all, should you think about some southern french/northern Catalan holidays, Argeles has it all: 7 km beaches, a lot of activities, hundreds of restaurants, a lovely old village, an English book galore, food to die for…

Here is a panoramic view of the seafront.

Our world on Tuesday, right here.

Not enough windows where you live? No problem: paint your own. It might lead to something nice! 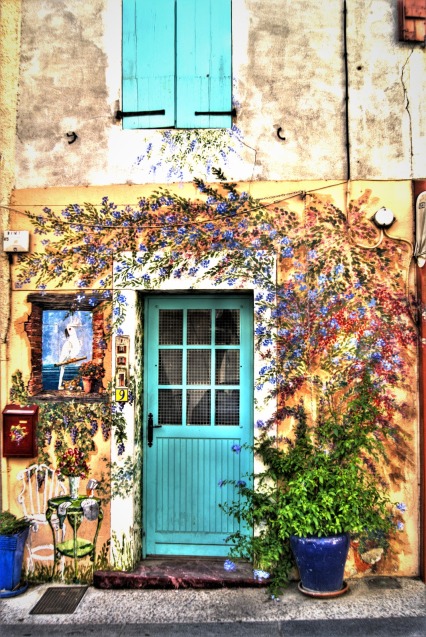 Greetings from the lovely french seaside resort of Argeles-sur-Mer, in Catalan Argelers de la Merenda. It is France, but it also still is Catalunya, or Catalogne in French. I like to call the french part of it Northern Catalunya, or Roussillon (in Catalan Rossello) The people here, some of them anyway, speak a very close cousin to our Catalan south of the border.
Confused? Click here!

The sky over northern Catalunya, for Skywatch Friday. 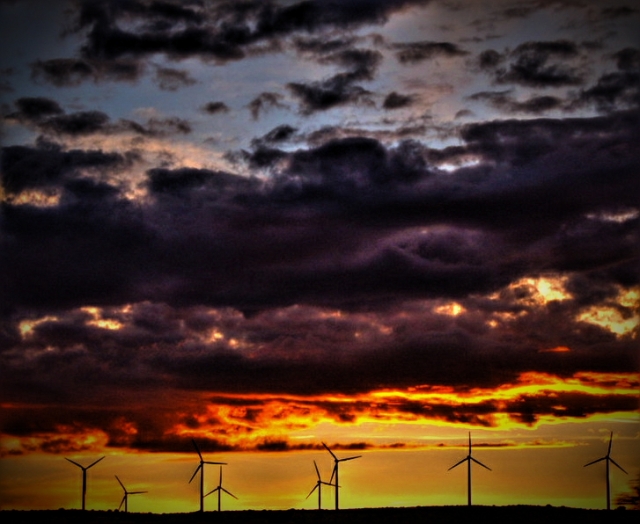 Oooops, I totally forgot this month’s theme day, about electricity. Therefore, a second post for today, a photo taken from a speeding train in french Catalunya.

Seems the weather is changing in the mountains, high up at the catalan-french border. I haven’t heard about snow yet, but when it will be here, this will be the best way moving around.

This is, as every friday, for Skywatch Friday.

One more photo from my trip to France, a few weeks ago. It’s not Barcelona, but it’s still northern Catalunya. Photo as I took it, straight out of the camera, for once.
This, of course, is for Skywatch Friday! Click here!

Going fishing…. On this:

Other news… I (that’s Rob) turned 50 yesterday, Monday. That makes me officially what they call in French a ‘quinquagenaire’. Oh well. 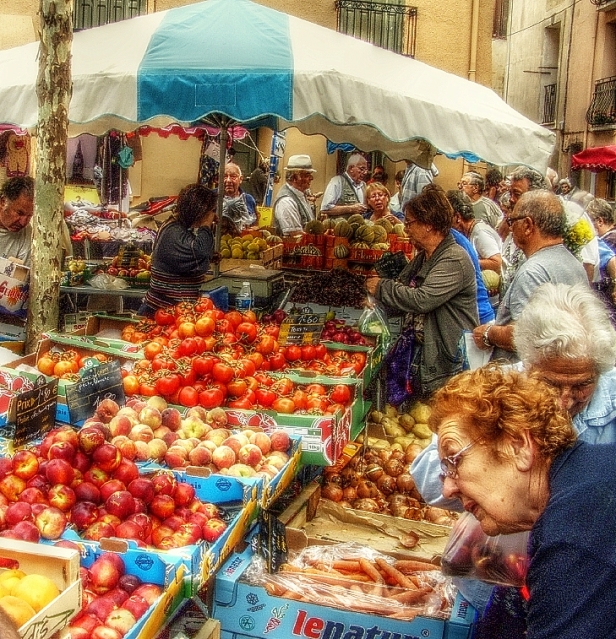 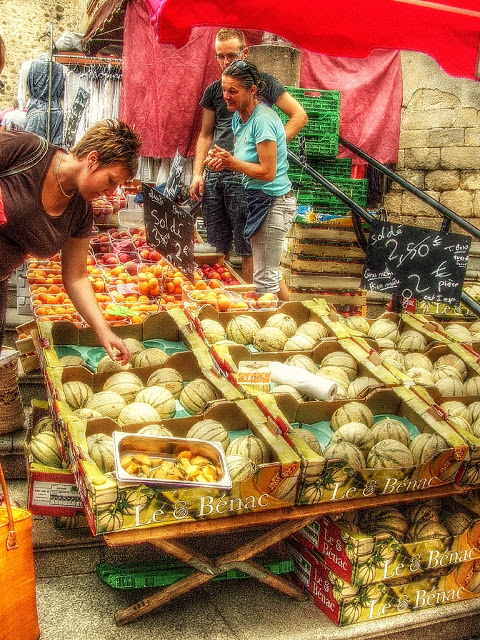 How to choose a good melon? One of the last great remaining mysteries on this planet.

We spent the weekend in Argeles sur Mer (catalan: Argelers de la Merenda), in the french part of Catalunya. And yes, Saturday was market day. And no, I did not forget the camera!

Before you buy, you need to check the ware! And if you’re good at it, you’ll get the best tomatoes in the world!

PS, much later… I slightly re-modeled this post, as many of you seem to prefer what is now the first photo.

The sardine is laughing

I have very little time and energy at the moment, so there is another one from the archives. The name of a house in french northern Catalunya. It is a word play,’la sardine rie’ meaning ‘the sardine is laughing’, but ‘la sardinerie’ is a sardine packing factory, therefore no laughing matter for sardines.
Can’t believe I just wrote sardine 5 times in the same sentence!
The house itself was fairly common. 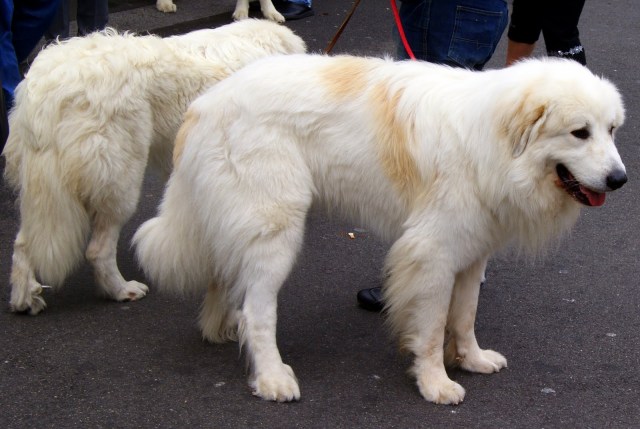 This is a Patou, or Pastou in the local dialects, in french Chien de montagne des Pyrenees, the quintessential Pyrenees mountains dog, common on both sides of the border, in France and Spain. It is a guard dog, used in medieval times to fight wolves, bears and lynx. Spotted a few of them in the mountains last weekend. They are the sweetest of dogs, but can be very protective. They need a lot of space, so don’t even think about having one in your 2 bedroom flat! He was made very famous in France through a TV series in the 70es called Belle and Sebastien, the adventures of Sebastien, a young boy, and Belle, his beautiful snow white best friend.