… at a chinese restaurant on the Ramblas. 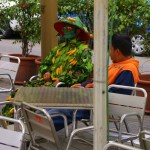 A man with many names…

Cristóbal Colón, standing proudly on his column at the bottom of the Ramblas. You might know him as Christopher Colombus, Columbus’ name in English is actually an anglicized version of the Columbus birth name. According to most accounts, Columbus was born in Genoa, Italy, as Cristoforo Colombo, which is obviously much more similar to the English version than is the Spanish one.

In most of the major European languages, Columbus’ name is similar to the Italian one: It’s Christophe Colomb in French, Kristoffer Kolumbus in Swedish, Christoph Kolumbus in German and Christoffel Columbus in Dutch.

Strangely enough, he is pointing not towards America, but towards Italy. Ashamed of what became of his ‘discovery’ of Hispaniola, Puerto Rico and Cuba, the massacre of the local tribes, refusing to convert, the european diseases, slavery… Maybe. Maybe not.

BTW, does anyone in America remember the italian cartographer Amerigo Vespucci? Aren’t you proud to live on an ‘italian’ continent?

And what about Leif Erikson?????

I love going through town very early in the morning, the city is so peaceful, no tourist hordes. Here I am, at the famous Kabul backpacker, on Plaza Real, just off the Ramblas. The best time and place for a coffee!

A word of warning 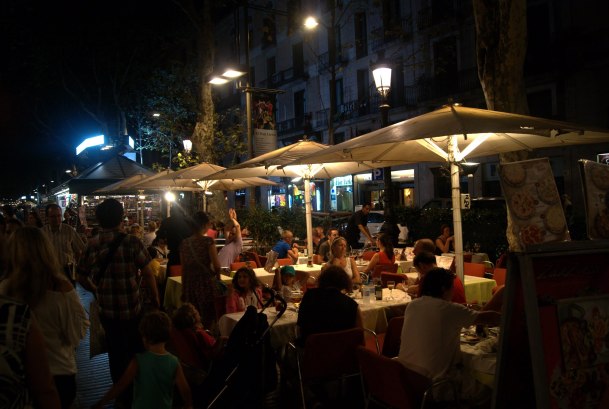 Barcelona is a wonderful city. Like any other place, it has it’s darker side. Take the Ramblas. A fantastic place for having a stroll, watching people go by, buy some flowers… And then, you are suddenly thirsty, or hungry. Bad thing… Be aware that BCN is like any tourist place… If you want an expresso on St Mark’s square in Venice, you pay the price! Same thing here. Also, be aware that all those restaurants with tables on the Rambla, serve overpriced and awful food. With very very few exceptions. My advice, leave the Ramblas, take any street into the Raval or the Barri Gotic, much better food, much less money!!! Not to mention the dozens (yep: dozens) of pickpockets, totally fearless due at the laxity of spanish laws. Maximum 3 days in jail if they are caught, and only if they stole more than 400 euros.
Just use common sense. 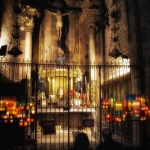 Probably the very first church in BCN… Sant Jaume, well hidden in plain sight, on Carrer Ferran, just inside the gates of Barcino, the roman Barcelona, 1 mn from the Ramblas. It was renovated in 1388, but the earliest mention dates back to 985 AD, where it was called the old church… 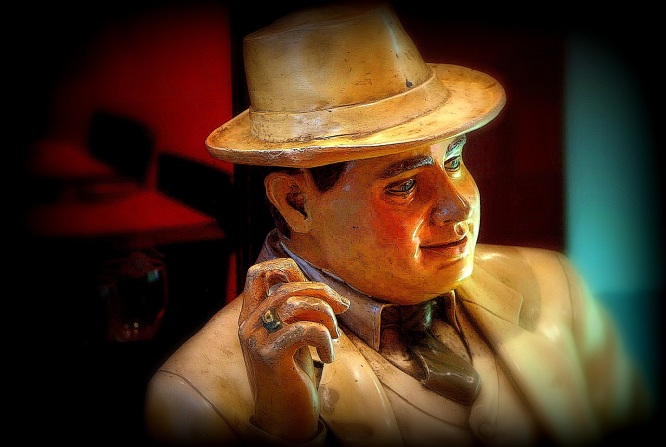 Big Al is having a Havana near the Ramblas… No idea why, but his statue sits in a passage going to the Villa de Madrid square. Anybody knows more about this??? 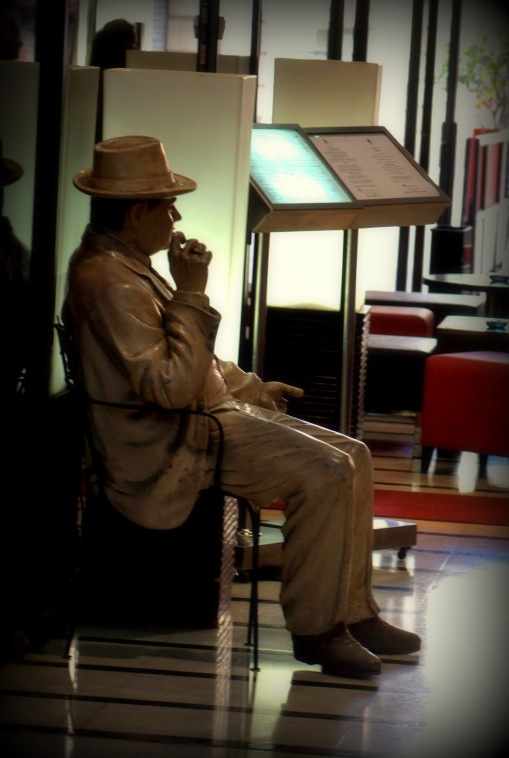 Off to work I go… 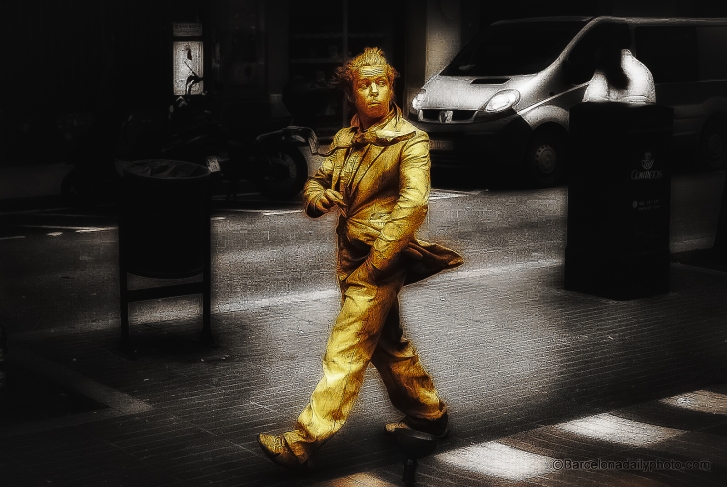 A common sight on the ramblas, Mr Goldie Boy. Not that street entertainers left, only 15 in the morning, 15 in the afternoon, according to municipal laws and rules. 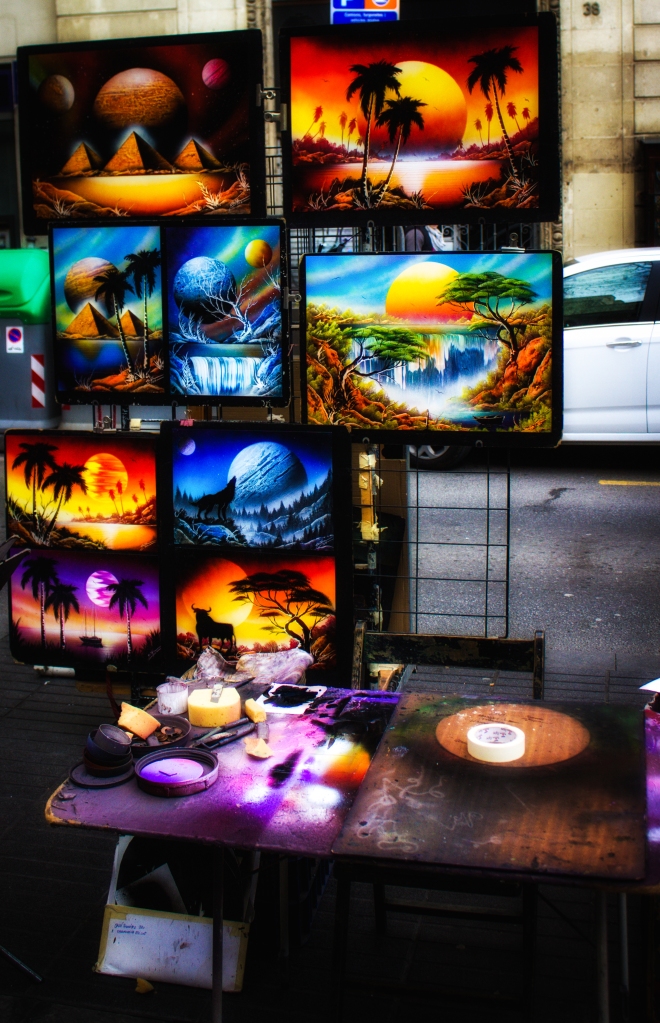 6th post in a row about painting, this one being about one of the painters on the Ramblas. You like painting? Check out some of my own works here, where I merge photography and painting. Painting with my camera.

A reflection near the big chinese restaurant on the Ramblas.

… be afraid of the dark lady!

Wind in your hair…

…if it wasn’t for the helmets. Good way to spend a scorching summer day. Watch out for sunburns, though.

Having both lived in Ireland, now and then we feel the urge for a nice Sunday roast, complete with roast potatoes, carrots, beans, parsnip, mash, and a nice piece of beef. And some Yorkshire pudding filled with gravy, which is not that Irish. So, this is where we go, Paddy Flaherty’s, probably the best of the many many Irish pubs in town.
And here’s what you get:

And a Guinness to get it down, of course! Or some uisce beatha, whiskey.

Yes, ice cream times are back, although we have a few rainy days coming up. But it’s finally nice and warm!!!

Walking down the Ramblas…

… is always a great pleasure, watching people, street entertainers, animals, flowers… Haven’t done it much lately, too cold, too tired, too busy… Any reason. Got a foot problem right now, quite painful, so I’m not going out much lately, just to work. Anyway, now that the nice spring days are coming back, will try doing it a bit more.
Oh yeah: got a thing for cacti!

One of the buildings along the Ramblas, in the sun.

… you can see so many marvelous things.

Our world on tuesday, right here.

None other than Mister Christopher Columbus himself, who graciously accepted to pose for Skywatch Friday. Very nice of him. Mille grazie, Signore Colombo! Did anybody tell you that you’re looking towards Italy? America is right behind you.

And happy 11.11.11 to everybody!!! Will think of you all at eleven minutes past eleven.

Other news. I have been struggling with my health lately, and my good doctor just gave me 3  1/2 weeks of forced holidays. Therefore I will finally browze your blogs again, whenever I’ll be feeling better.

(Video removed as it seemed to have a virus attached)

Been playing around lately with a panorama maker program. Here is something I did yesterday afternoon on the Rambla, 5 photos put together, 18.5 MB… Click on the picture to see it bigger, it is really worth it!

Fed up walking around in the sun, too hot for the beach? Here is an idea: the Museum of Erotica, in front of the Boqueria market. You get a free drink,and Wifi, how’s that? 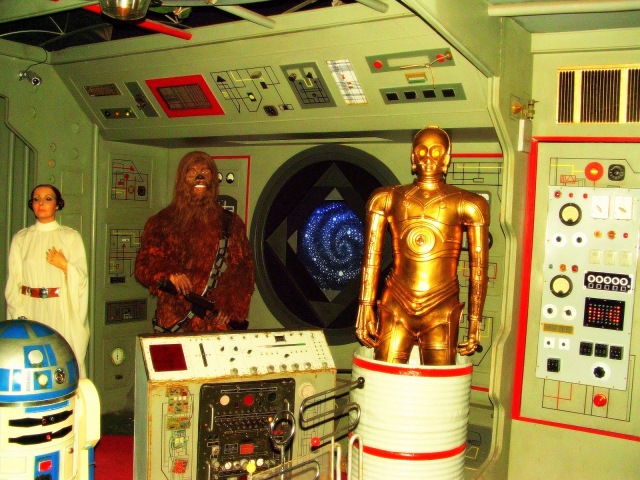 Had some visitors yesterday, officials from the wax museum on planet Spielberg Beta 3 Omicron… Welcome, strangers, this is my world!

The lights on the Ramblas 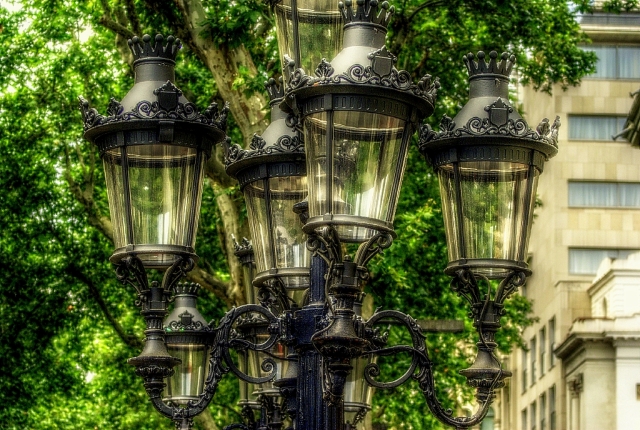 These magnificent modernist lamps illuminate the Ramblas every night. 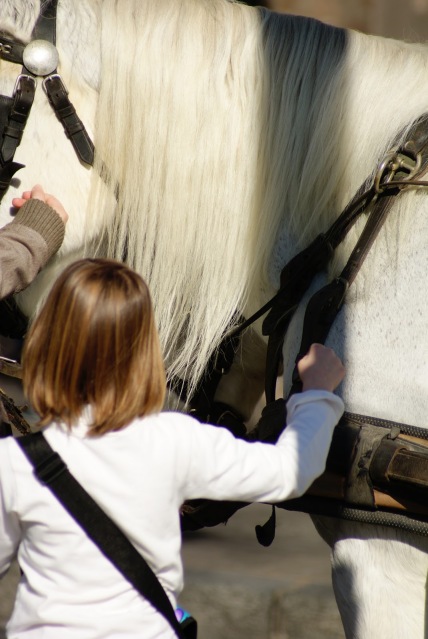