A beautiful and flamboyant modernist building, dating back to 1905. It was built for choir music, very trendy a century ago. If you mind the longish queue, it is one of the must to visit! Here is the Wiki article about it.

So many things in Barcelona are sea-related. Well, it is one of the main port on the Med.
Anyway, this is in my opinion the most elegant church in town, Santa Maria de la Ribera, the cathedral of the sea. You might have read Ildefonso Falcone’s book about about it, a local bestseller. More about the church here. 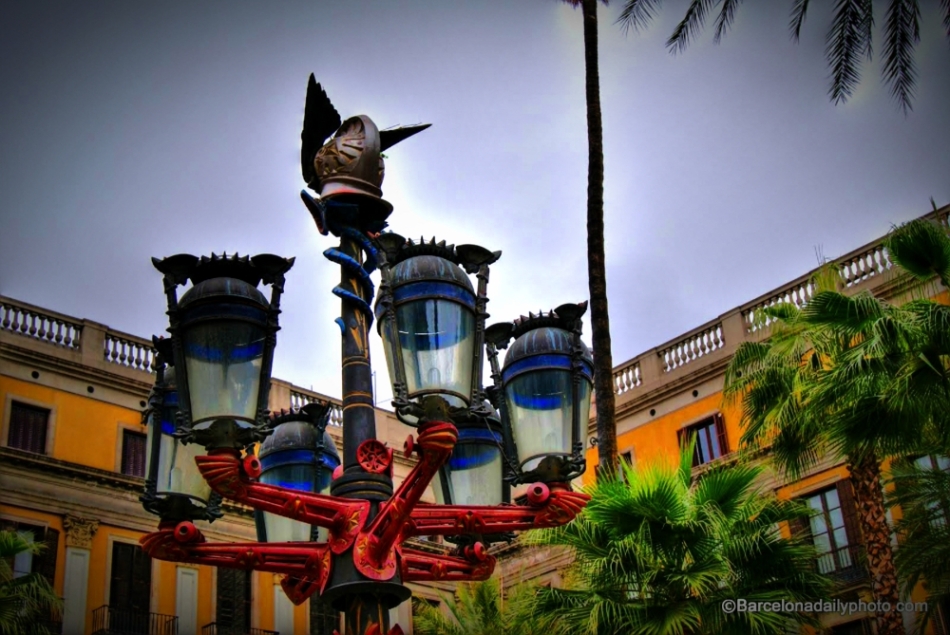 After a short interlude on the beach (really hot here), back to the Palau for a quick drink. Right in front of you, through the door… 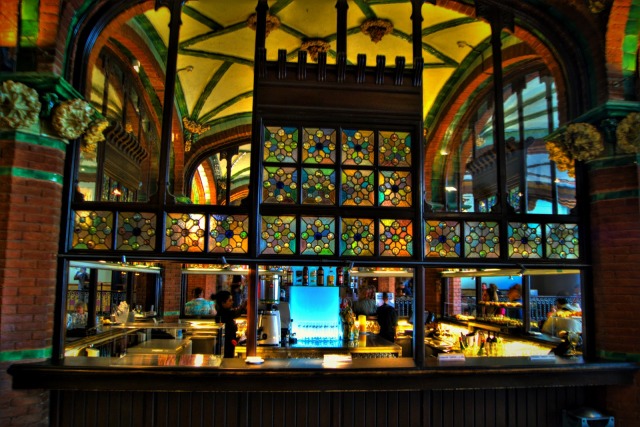 That’s right, here it is. Enjoy your champagne! 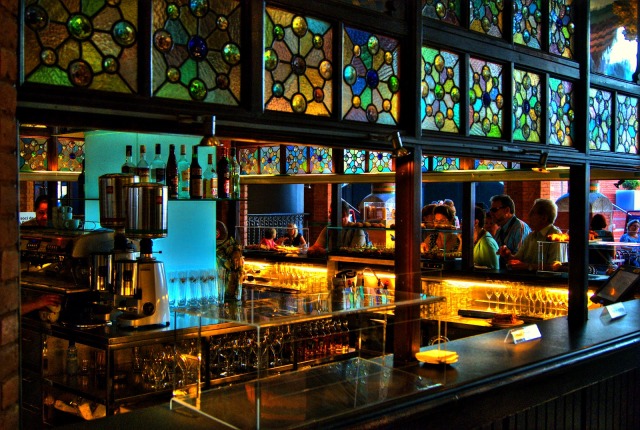 One of the cafes behind the City Hall, with a very art deco style.

Last post of the year, with a very fine example of the buildings along Gran Via, our main thoroughfare.
Time to forget about the crisis, and to celebrate the end of a year. We will be very happy to see all of you next year!

And don’t forget to have a look at Dave’s Weekend Reflections blog!

Indios in Barcelona. Not exactly what you might be thinking. Indios, Indians, were people from Catalunya who emigrated to the West Indies, mainly Cuba, during the 19th century, made a fortune there, mainly with cane sugar, rum, and so on. They later came back rich, and built many of the fine buildings in Barcelona. One of them opened this shop in the Raval, where you can still buy good quality sheets, linen, blankets…Many of the rich merchants who helped the struggling modernist architects such as Gaudi at the begining of the 20th century were Indios.

The bar at the entrance of the Palau de la Musica. Nice, no? You might notice the ‘no filming’sign on the side. Well, no photos either, as we have been firmly told by one of the minders. We played the not-knowing tourists, of course… Well, we didn’t know, we noticed the beauty of the place, not the ugly little signs next to the trash cans.

The Arc de Triomf. Built 1888, for the Universal Exposition. A very familiar monument, passing in front really often. But… last saturday, I spotted this… 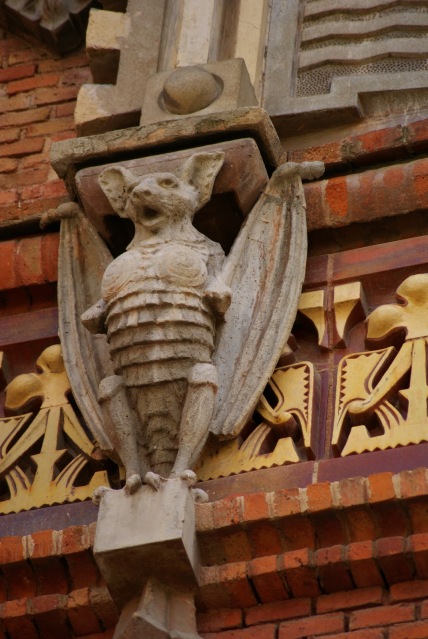 There are 2 of them, and I don’t know why they’re there.

Update: Ken just sent this to me.
On the triumphal arch, you will find attached some stone  bats. It was
the emblem of King Jaume I. (1213-1276) (James of Aragon). Under Jaume
I., Barcelona flourished economically and he liberated Valencia,
Menorca and Mallorca from the Moors. On 31 December 1229 his troops
conquered the city of Medina Mayurka. The bat was his lucky charm. The
city of Medina was later called Ciudad de Mallorca and in 1717 it was
renamed again in Palma de Mallorca, as the city was called in Roman
times.
The bat is still the emblem of Valencia and was for example also part
of the first crest of FC Barcelona.

Fodor’s Barcelona Guidebook says:
“Jaume i’s affinity for bats is said to have stemmed from his Majorca
campaign, when, according to one version, he was awakened by by the
fluttering rat penat (literally, “condemned mouse”) in time to stave
off a Moorish attack.  Another version attributes the presence of the
bat in Jaume I’s coat of arms to his gratitude to the Sufi sect that
helped him successfully invade Majorca, using the bat as a signal
indicating when and where to attack.”

The first United Nations University of Southern Europe and 11th in the world will open in Barcelona in 2012. It will be located in the historic Hospital de Sant Pau, an Art-Nouveau set of pavilions that was used as a hospital until two years ago. The UNI-IIAOC Institute will promote research and training in education, migration, youth and the role of media.
And this, my friends,  is part of the rather magnficent entrance. Being a student in there… Nice! 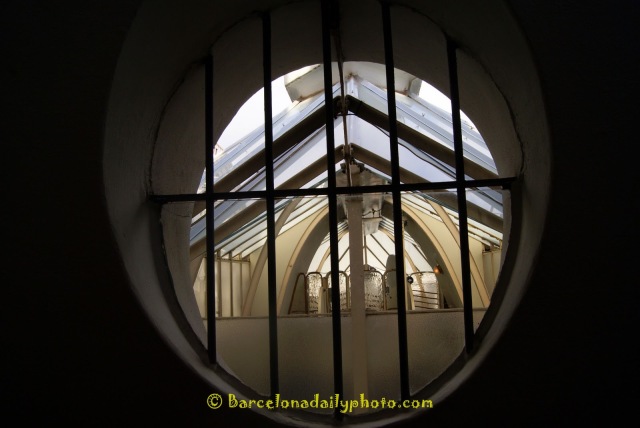 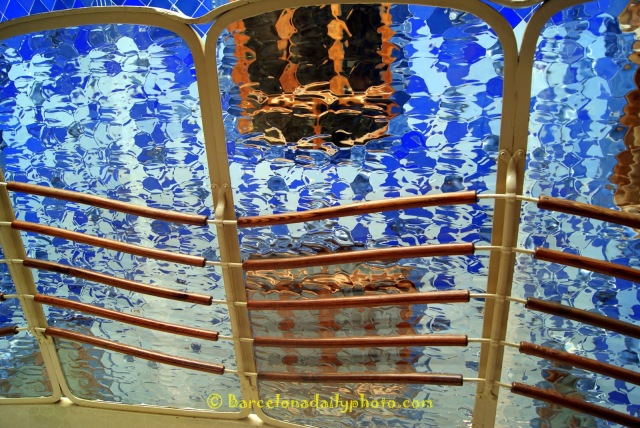 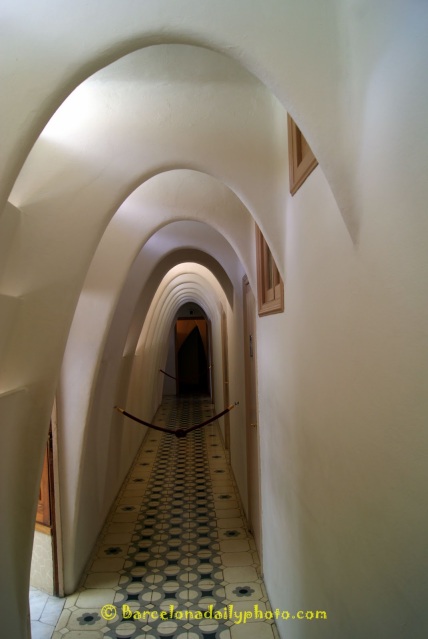 We passed the Palau de la Musica yesterday, and I just can’t resist showing you the facade.

This is for My world Tuesday. Click here to see more.

I am having a very busy week, barely any time to browse your blogs. Will be back asap.

The Casa Bruno Quadras (or Cuadros) was built in 1883, a few years before the 1888 Universal Exhibition in Barcelona. The architect Josep Vilaseca combined the prior style of modernisme with all kinds of architectural elements inspired by other cultures in an eclectic building which amazes everyone who walks along La Rambla. The Casa Bruno Cuadros’s balconies and the top-floor gallery are replete with Egyptian imagery. The façade features elaborate sgraffito work and stained-glass windows as well as reliefs of umbrellas and fans made of cast-iron. Orientalist motifs impregnate the outer walls which features intricate carpentry, enamelled glass and paintings of people taken from Japanese prints. The Casa Bruno Cuadros’s most opulent decorative element is the ornate Chinese dragon on the corner of the façade. It was used to advertise the shop, together with the umbrella below it. The building was refurbished in 1980, and a bank now has its premises in the stunning umbrella shop of Barcelona. 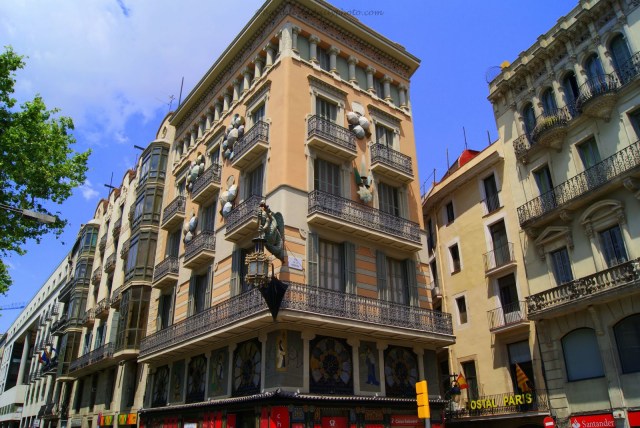 A couple of lamps at the MNAC, with a very distinctive modernist style, what they probably would call Art Nouveau in Paris, I suppose.

I am starting today a small series about the MNAC, Museu Nacional d’Art de Catalunya. The Museum is celebrating it’s 75th anniversary, with an exhibition called ‘Convidats d’Honor’, guest of honor. It’s a kind of best of the museum’s pieces, and it is worth the visit, believe me!

The first piece we want to show you is this wonderful catalan art nouveau dressing table, the finest we’ve ever seen. Wouldn’t you love to have it in your boudoir??? We would! Without the people in the mirror though.

The header, by the way, is another rendition of the museum’s cupola. The best way to see it is to sit down on one of the too comfortable sofas put there for this purpose. Lean back and enjoy, in other words!

Art Nouveau lamp in front of the Arc de Triomf 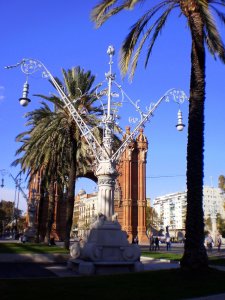 Street lamp near the Arc de Triomf, Passeig Luis Companys. This area was totally transformed for the 1888 Universal Exposition. Nowadays, it is a popular place for gigs, concerts, exhibitions.

This is not a wedding cake!

No, it isn’t, believe it or not! This is the Casa Batlló, built for a middle-class family (!), and remodeled by Gaudi. Not a lot of straight lines in there, very organic! Locals call it the bone house.
The building itself is situated in Passeig de Gracia, Barcelona’s Champs Elysées, and is an absolute tourist magnet, as you can imagine! For myself, I just love it! Then you wonder where Hundertwasser got his ideas from!

Here is a detail of the house:

Want to know more about it? No problem, just click here! Wiki will help!

The Casa next door is about as crazy. More about it… later, in another post.

This is a detail of a folding screen I saw in the MNAC, or Museu Nacional d’Arte de Catalunya, a while ago. Somptuous, isn’t it?

Art Nouveau at the MNAC 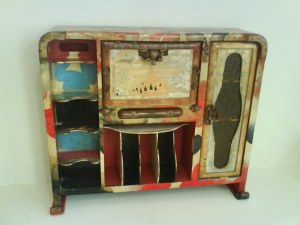 We went to the MNAC, Museu Nacional d’Arte de Catalunya, a while ago. Very fine museum, absolutely not to be missed!
Among many other beautiful things, I discovered this Art Nouveau furniture. I actually took a note of what it was and who had made it, but I lost the paper. So, If anyone knows more about it, please put a comment! Molt gracies!
09 July: might have been Miucha