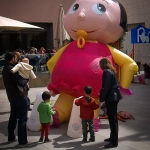 Saw this girlie one day at the MACBA. It was an open day for kids at the modern art museum. Cool! The kids loved her!

The sky, as reflected on the MACBA, Barcelona’s contemporary art museum. I left the guy in the picture to give an idea of the size.