In a semicircle on the sides of the back of the stage are the figures of 18 young women popularly known as the muses (although there are only nine muses in Greek mythology). The monotone upper bodies of the women protrude from the wall and their lower bodies are depicted by colorful mosaics that form part of the wall. Each of the women is playing a different musical instrument, and each is wearing a different skirt, blouse, and headdress of elaborate design. In the early days of the Palau, many critics found these figures unsettling or even eerie, but today they are widely regarded as perhaps the best sculptural work in the concert hall. The upper bodies were sculpted by Eusebi Arnau, and the mosaic work of their lower bodies was created by Lluís Bru.

The dominant theme in the sumptuous sculptural decor of the concert hall is choral music, something that might be expected in an auditorium commissioned by a choral society. A choir of young women surrounds the “sun” in the stained-glass skylight, and a bust of Anselm Clavé, a famous choir director who was instrumental in reviving Catalan folk songs, is situated on the left side of the stage, under a stone tree. Seated beneath this statue are sculpted girls singing the Catalan song Les Flors de Maig (The Flowers of May).

The Lluís Millet hall is a salon located on the second floor of the Palau that is named after one of the founders of the Orfeó Català. The hall is a popular gathering place for concert-goers and also serves as a teaching area for visitors touring the building. From floor to ceiling the hall is two stories high and affords views of the intricate mosaics on the two rows of columns outside its windows that are much better than those available from the street.
It is ornated by several bronze busts of musicians related to the Palau: Lluís Millet and Amadeu Vives (Orfeó Català founders), Pau Casals, Eduard Toldrà (founder and first conductor of the Orquestra Municipal de Barcelona, Just Cabot (Orfeó Català president) and pianist Rosa Sabater. 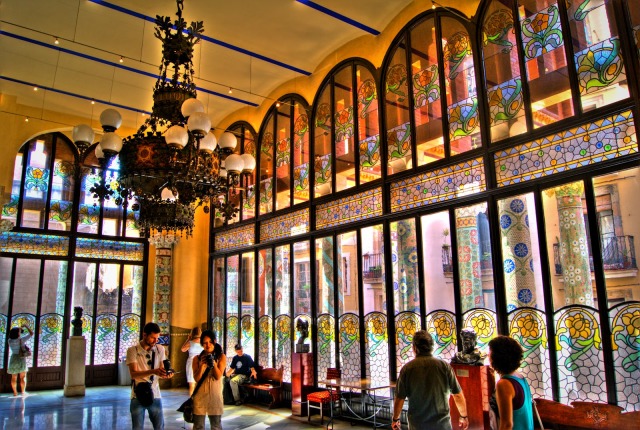 The concert hall of the Palau, which seats about 2,200 people, is the only auditorium in Europe that is illuminated during daylight hours entirely by natural light. The walls on two sides consist primarily of stained-glass panes set in magnificent arches, and overhead is an enormous skylight of stained glass designed by Antoni Rigalt whose centerpiece is an inverted dome in shades of gold surrounded by blue that suggests the sun and the sky. 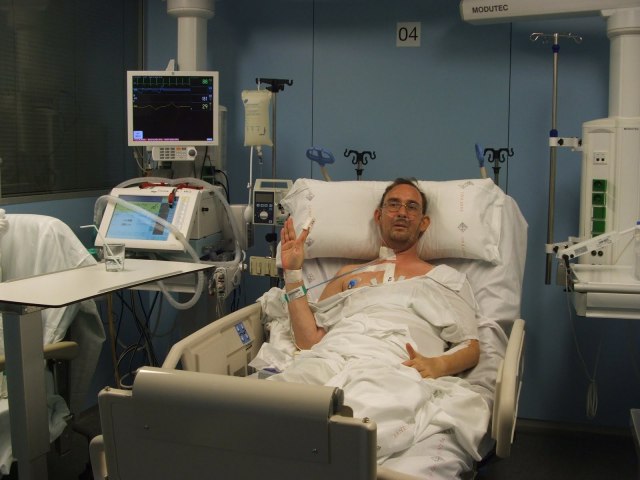 Yep, that’s me 3 days ago. Came home today, after a remarquably fast operation (4 1/2 hours) and recovery at hospital, exactly a week. I still feel I’ve just been run over by a bus, AND beaten up by 20 thugs for a couple of hours, but the doctors say it will pass. Eventually.
But anyway, this is inside the very modern intensive care unit, ICU, with some extremely capable and friendly staff. Thanks to all of them!

Will be back blogging, but maybe on a slow burner for a while. Thanks for all your get well wishes!