The Arc de Triom, next to Ciutadella park.

I have been around a fair bit… But Barcelona, which I left 1 year ago, is and will always stay for me the best ever place for a leisurely evening stroll. Winter or summer, rain, snow (not very often!), there is always something to see, something to do… A photographer’s paradise!!! I took some 110.000 photos there in about 6 years… And you?

Nightfall on the seafront

The moon over the Clot area, a while back.

Fancy a slice of 2 of jamon serrano, cured mountain ham, late at night, as we all do now and then? That’s the place to go!

Some more lights in the night… There had to be a Christmas tree on Plaza Catalunya!

This seems to be the common decoration for the Corte Ingles superstores in Spain. Well, at least here and in Sevilla (thanks, Ashleigh!). How is it in Lisboa, JM?

This is the last of this series of Christmas lights night shots. Tomorrow, we’ll be getting… seedy…

Ice-skating on Plaza Catalunya…. Very controversial, as many many Barceloneses think that the 700.000 euros cost to operate it is a slap in the face of the 4.4 Mio unemployed in Spain. And the rising poverty and misery which goes with it, as unemployment benefits are very low in Spain, and hundreds of thousands don’t even get them anymore.

But it brings a smile to this little girl’s face.

Our World on Tuesday, and until Christmas.

Many tourists (and photographers) in town, all of them admiring the Christmas decorations on Plaza Catalunya

Lights in the darkness

Crisis or not crisis, the Christmas lights are on, and the city center looks totally gorgeous! More night shot full of light to come.
One strange thing about this photo though, for us anyway… Outside temperature 19 degrees, high sixties. Not too christmassy! No need for a sweater yet.

Well, this needs an explanation, I suppose. 6 weeks ago, we celebrated Our Lady of Mercy, better known here as la Merce. 4 days, big celebration, music, fireworks, hundreds of items on the program.

This is the official pooster for the celebration, projected from above.  And I guess when you’re a 3-5 years old, it’s a lot of fun to walk on the faces in the poster, and to play with the light and the colors. As I am a serious adult, I didn’t. But gosh, I wish I had!

Having very little time, and even less energy at the moment. Will be back browzing your blogs as soon as I can.

Going through Ciutadella Park on Sunday night, we came across this exhibit. No idea what it was, but it looks nice. Maybe some alien landscape .

Computer problem solved: it was cheaper to buy a new one then to have the old one fixed. Fortunately, all my stuff was safe.
2 weeks ago, I found that one of my photos had been ‘pirated’ by some website. After I complained, they removed it immediately. Watch out. Just google-images the name of your blog now and then, and check where your photos are. There are other ways as well. Firefox, for example has a ‘who stole my photo’ add on.

This is for the weekly Our World Tuesday meme. Check it out!

… as it says on the front of the Barcelona city hall. In Russian. This year’s special guest of the Merce: Saint Petersbourg.

Hmmmmm. Some hesitation tonight. Or not. Many of this blog’s friendly commentators asked me how I process my pictures. I mostly use a small and easy to use High Definition Range program, called Luminance HDR. To give you a better idea of what you can do with it, below is the original photo, SOOC, straight out of the camera. In this case, although I’m quite happy with the result of 3 minutes of playing around, I like the original best. What do you think?

Once again, please click to see what others did for Skywatch Friday. Here. 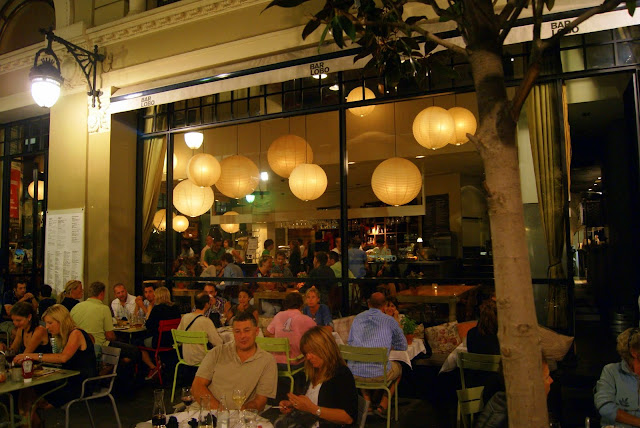 AND A BIG GREEN HAPPY SAINT PATRICK’S DAY TO ALL OF YOU!!!

Our street, at night, with the palm tree.

This is for My Street … I mean My World Tuesday. You know what comes next. I will ask you to click. Don’t ask, just do it. Right…HERE!

Blue in the night

Barcelona at night…. A few restaurants in the Born area of the old town.

Late at night… Many strange creatures in the bars and pubs here. Maybe this one was just having a drink at the Clot community house (Clot being the name of the area here).
Silly hat, anyway.