Looking at me from inside the Jardinet dels Gats cat shelter, and wanting to be loved and adopted.

El jardinet dels gats, catalan for the cat garden, is an city center shelter for abandoned or homeless cats. Our very own tiger, Rio (you can visit his blog here), came from here.
If you’re in Barcelona, and if you need/want a cat, this is the place to go!

Been a while… Fernando Botero’s cat in the Raval.

The cat on the hot tin roof?

No, we wouldn’t let him go there.It is very very hot, and our Rio would love to shed his fur coat and be in the nude. So we wet him with a towel, and he loves it! Not an outdoor cat, no no.

This month’s theme day is about animals. Which is fine, as it allows me to stay a bit longer on the Chinese new year celebration.
I realize that, even though I’ve seen those cats very often (even have one in my office), I don’t know their exact meaning. A luck bringer??? Anyone?

A chance meeting in the sun.

Lots of cats living wild on Montjuic Hill. And they need to drink as well. Spotted this one on a very warm and sunny  afternoon, last sunday, just a few meters away from the Magic Fountain. A fine pussycat for a fine Watery Wednesday!

Aw, I just can’t resist when I see a sweet family like this one: I HAVE TO take a photo or 5, and I have to resist the urge to take them all home. But I think our own Puss, Rio, would not be very happy. Anyway, adorable, aren’t they? 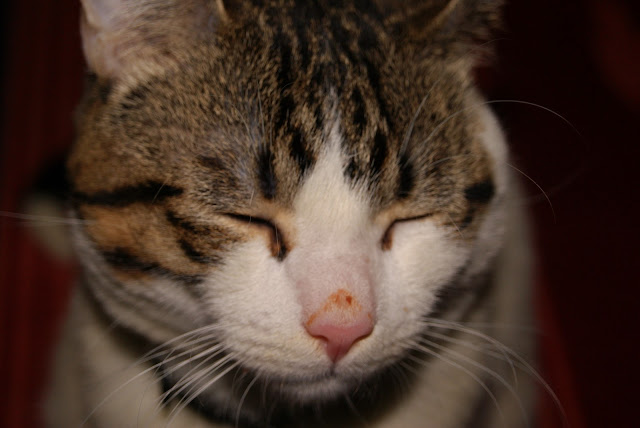 One of the cats living off the land in Ciutadella park. The way they move is quite remarkable, more like larger feline than house cats.

This is Fernando Botero Angulo‘s “Gat”, Catalan for cat, in the Raval area of Barcelona. El Raval, from the arabic ar-rabad, outside the walls, where I also took the Heaven and Hell photos, was a former belt of garden plots. In the 18th century, it turned into Barcelona’s working class district.
Mostly slums.
It still has quite a bad reputation, drugs, prostitution. As the rents there are low, the Raval is nowadays populated mainly by immigrants. It is also known as Barri Xino, or Chinatown.
The city tries to clean the area, and it is actually up and coming. It hosts amongst other things the MACBA, Museum of Contemporaneous Art of Barcelona.
And also what might well be the biggest and roundest smiling cat in the world!

Not quite.
Click here to view thumbnails for all participants to this theme day.

This picture was taken in one of the 2 cathedrals in Barcelona. No, not in Sagrada Familia, but in the old one, Santa Eulalia, in the Bari Gotic, the one that’s actually finished (even though they are revamping it right now).
There is a beautiful cloister in the compound, with a 14th century urinal, and some geese. Cool and shady place, a very welcome break from the heat in the summer.

I have been living in Larnaka, Cyprus, for a while. Lots of wild or abandoned cats were living/surviving on the streets, parks, beaches, begging in restaurants. 3 or 4 people took care of them, feeding them, or even taking them to the vet, if they needed it, all on their own expenses as, sadly, the municipality did not really care.
Not quite sure how it is here in Barcelona, but on Montjuic Hill, the cats seem to have at least one very organized friend.