You too can create your own planet! This is la planeta del Poblenou, complete with Hilton hotel and a beach!

Paintings with my camera 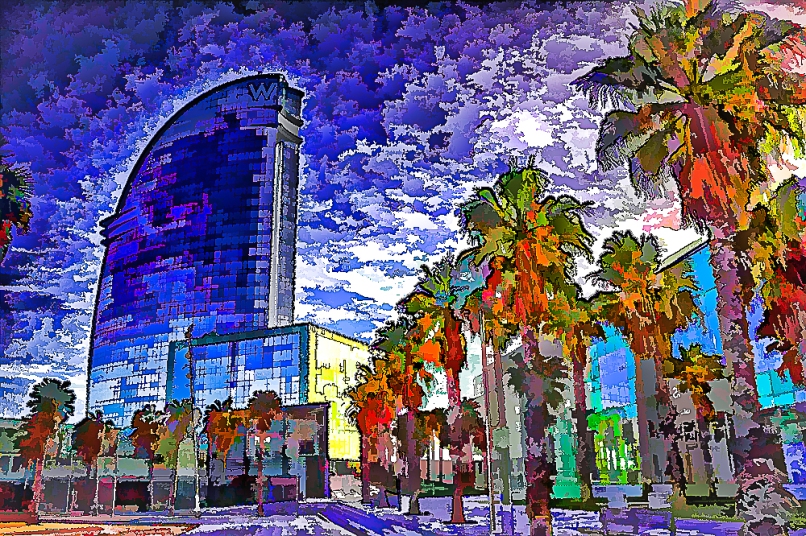 A little publicity today, for myself. I recently started this project/website, taking some of my photos, and transforming them into paintings, using mainly Adobe Lightroom, and several plug-ins. Want to see more? It’s right here!

BTW, this is the W hotel, facing the Desigual HQ.

OK. Now that you’ve walked hundreds of kilometers, for a month or 2, you finally arrived at the Cathedral in Santiago, and you need a shower and some rest. Well, one of the options is the Hostal de los Reyes Catolicos, the hotel of the catholic kings, just next door to the cathedral. You’ll probably very well treated there, as it is, according to many, one of Europe’s best hotels, with 5 stars.
Here is a close-up of the entrance.

It is claimed to be the world’s first hotel and has housed a hospital. It is now one of Spain’s sumptuous state-run paradors.
The hotel is a “stand alone” example of Galician architecture. It has a decorative facade designed by Enrique Egas which includes sculptures, coats of arms and a series of narrow windows, but it is the internal features of the building and its geometry that really make it special.
The hotel has four colonnaded and interconnected courtyards within its walls. Two of these piazzas date from the eighteen hundreds, but the two earlier squares are from the sixteenth century and feature water fountains at their hearts. The later courtyards are of a baroque design and were constructed during extensive remodelling and renovation.
The building was commissioned by the Spanish king in the fifteenth century as a hostal and hospital for Santiago’s visiting pilgrims.

A very cool international hotel on the Ramblas, I suppose… Enjoy your breakfast!

Happy 4th of July, American friends, and I know you’re many! 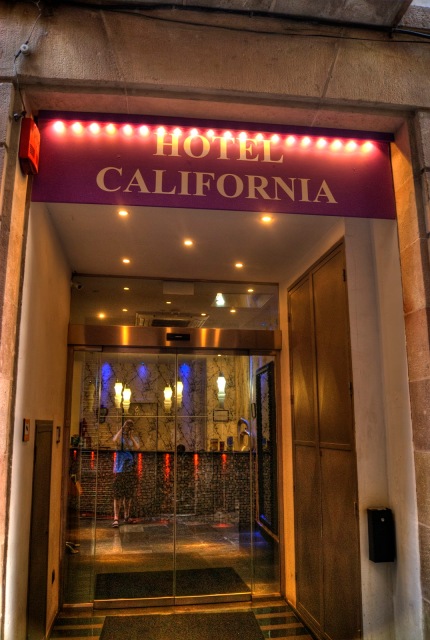 On a dark desert highway, cool wind in my hair
Warm smell of colitas, rising up through the air
Up ahead in the distance, I saw a shimmering light
My head grew heavy and my sight grew dim
I had to stop for the night
There she stood in the doorway;
I heard the mission bell
And I was thinking to myself,
“This could be Heaven or this could be Hell”
Then she lit up a candle and she showed me the way
There were voices down the corridor,
I thought I heard them say…

Her mind is Tiffany-twisted, she got the Mercedes bends
She got a lot of pretty, pretty boys she calls friends
How they dance in the courtyard, sweet summer sweat.
Some dance to remember, some dance to forget

So I called up the Captain,
“Please bring me my wine”
He said, “We haven’t had that spirit here since nineteen sixty nine”
And still those voices are calling from far away,
Wake you up in the middle of the night
Just to hear them say…

Mirrors on the ceiling,
The pink champagne on ice
And she said “We are all just prisoners here, of our own device”
And in the master’s chambers,
They gathered for the feast
They stab it with their steely knives,
But they just can’t kill the beast

Last thing I remember, I was
Running for the door
I had to find the passage back
To the place I was before
“Relax, ” said the night man,
“We are programmed to receive.
You can check-out any time you like,
But you can never leave! ”

Well, this one is in Barcelona, and you can leave whenever you want. I suppose. Our World Tuesday!

… but are you really sure you want to sleep here??? Who knows when you’ll wake up!

One of the many noble buildings in the city center, reflecting…
Have a look what others did, here.

There’s a world out there…Full of wonders and miracles, big and small.

Andorra: a room with a view

During our recent trip to Andorra, we stayed in this nice 4 stars hotel in El Serrat, and we had a room with a view…. to take our city-dweller’s breath away.

Having a drink on top of the hotel next door… Nice.

Curious name for this hotel in  the Raval indeed.

Click here to see more of My World Tuesday. 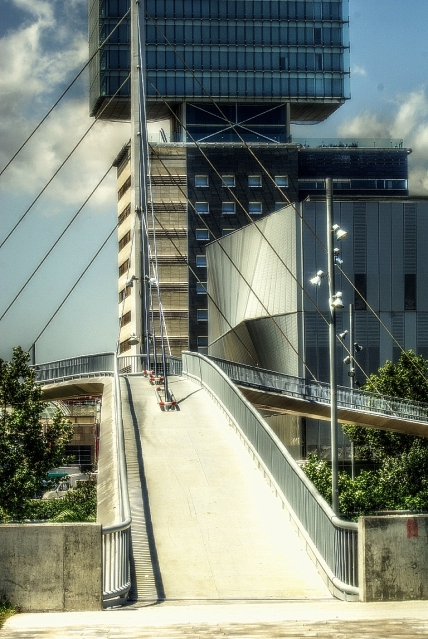 Monsieur Louis la Vache, apart from having a very nice blog and a balcony with a view, also has a weekly meme about bridges every Sunday. So, this is our entry, the pedestrian bridge just behind the big and very expensive hotels in the Forum area. Enjoy some more photos and bridges right here!

A pool on the roof 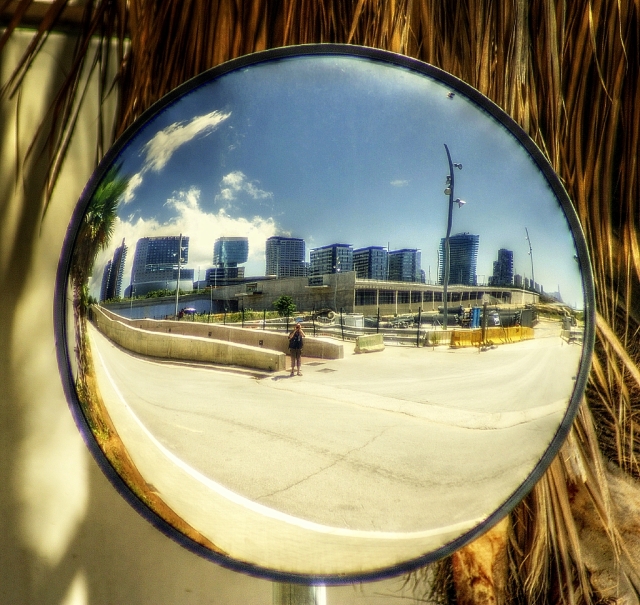 How cool is this!

W…ell, another Wednesday, a Watery one as usual. Still ‘levitating’, I came towards the high rise Westin hotel. Quite a new place, it opened a year ago, or so. Last time I was there, Shakira was filming one of her clips there, you might have seen it (forgot the title, not being a fan of the lady’s music). Right there, on this very beach.
I posted another picture of the Barcelona seafront, all of it, here, if you are curious (and it’s healthy, being curious!).

The Arts Hotel, where all the celebs go to when they’re around. Who did we have here lately? Scarlett Johanson, Woody Allen, Shakira, Antonio Banderas, Tom Cruise I think. The Pope was here as well, but he stayed somewhere else.
Their better suites can cost up to 10.000 (that’s ten thousand) euros a night.
We have some youth hostels in town as well.

This is for Skywatch Friday. Please click right here to see more! 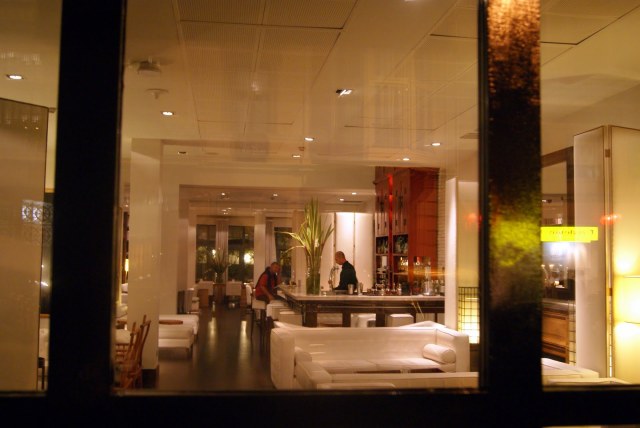 Classic photo of a hotel bar, the lonely customer and the barman. Will they talk to each other? What will they say? Will they talk about the weather (tropical), or the meaning of life, problems at home? You know all the cliches.

Waiting at the Mandarin Oriental

I started anothe little blog, posting not necessarily my best, but definitely my favorite photos from around the world. You’ll find them on top of the sidebar.