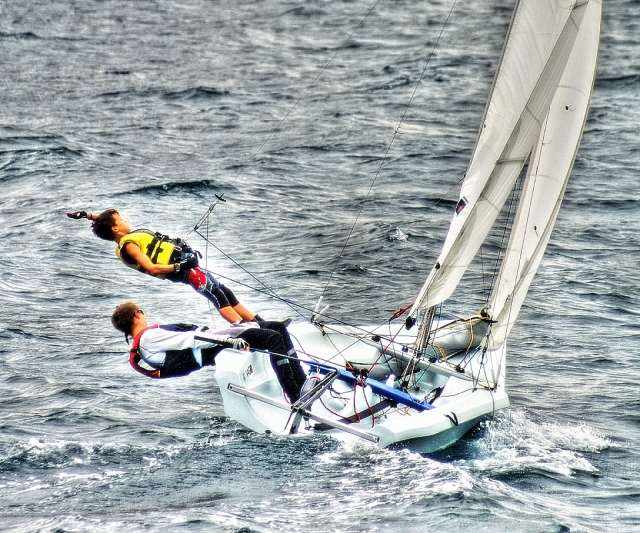 One of the great things to do here…

This is for the weekly Watery Wednesday meme. Click here!

Extreme sailing is a sport dominated by men, with some very notable exceptions, like Ellen MacArthur. Therefore, this is the boat I want to win, the Gaes Centros Auditivos (named after the sponsor, no names like Pen Duick anymore), the only boat crewed by 2 women, the Brit Dee Caffari and the Spanish Anna Corbella. Only 3 women amongst the 30 crew of the boats

Much more information about the crew, the boats, the race generally, can be found here.

On December 31st, at 13 hours, will start one of the main events of the sailing year, the Barcelona World Race. 15 boats, 2 crew per boat, going around the world, non stop, from Barcelona to Barcelona, 25000 miles or 46300 km. It will take them over 3 months, in those incredible IMOCA Open 60 yachts. 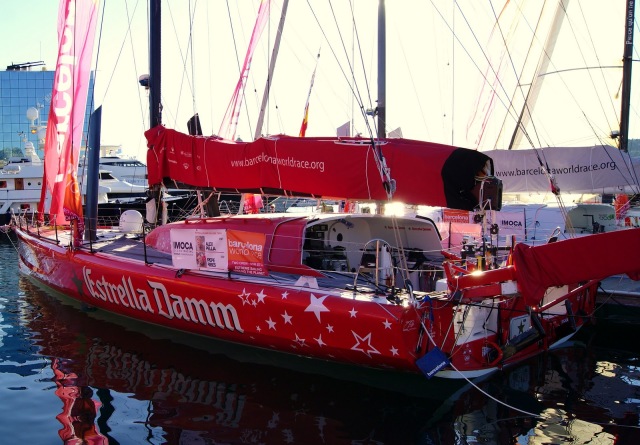 These boats are part of an ‘open’ class. That means that the designers enjoy a level of freedom when designing, as long as the boats fit within the measurements of 60 feet (18.29 meters) in length, 4.5 meters of draught and a mast that must be no higher than 28 meters above the water. The design must also comply with a series of safety requirements that can be divided into two main groups:

Stability regulations. These are a series of requirements and tests performed on each boat to guarantee stability and self-righting action if the boat were to capsize.

The IMOCA Open 60s are specially designed for solo and double-handed ocean sailing. The shape of the hull and the rigging features respond to the average wind direction and swell experienced in a west-east circumnavigation of the globe. Favoring fair winds, the IMOCA Open 60s have smooth, straight hulls to plane across waves, and can reach speeds of up to 25 knots.

And here is their route:

The best of luck to them!

Playing around with GIMP and other stuff… Below is one I made much earlier, a century or so ago… 🙂 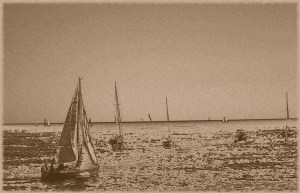 Well, after the big boats I showed you lately, I have to say that this is much more my style!

Amongst the many urban regeneration plans the municipality here had to welcome the 1992 Olympics was the transformation of the Port Vell, or Old Port. Once an industrial waste site, full of rusting machines, ruined warehouses, chemicals all over the place, it is now one of the places you go on a weekend. Several cinemas, restaurant, the Maremagnum shopping mall, one of the biggest aquariums in Europe. All this on an purpose built artificial island. And, of course, the Marina. More about it here.

Barceloneta by the sea

Lat Sunday, I took a swallow. Yes. Spanish: una golondrina, which is one of those little boats you can take along the coast. Barcelona, seen from the sea.
This is Barceloneta beach, one of the most popular ones. We have here a long string of beaches, 7 or 8 of them, all along the town. You can’t really be far away from the next beach, which is very enjoyable! The beach was obviously very crowded, although the sky was kind of greyish-white, and the sea pretty choppy. I’ll show you a bit more in the next few days.
What you see in the back is the church in Tibidado. Will come back to this as well, some time soon. Stay tuned!

Another picture taken from Montjuic Hill… Italy, this way.

The Med in Collioure

Well, back from too short holidays north of the border, in what is not Spain anymore, but still in Catalunya. Collioure, a very lovely small port between mountains and sea, absolutely packed full with northern European and French tourists.
It was not really going abroad… Here in Barcelona, the 2 official languages are Spanish and Catalan. And in the northern part of Catalunya, they speak French and Catalan. Catalan will never be an official language in France, as the French government would never allow any language other than French. History of other languages and dialects, or even cultures in France is a long and very sad story. The big bad word is : assimilation.
But still, same culture, same food, same dances than in the Spanish part of Catalunya. I will tell you more about it during the next few days.